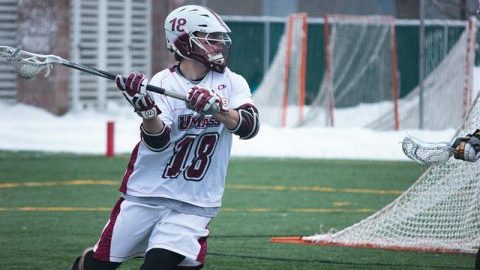 After failing to pick up a win in its first four games, the Massachusetts men’s lacrosse team got in the win column Tuesday night, upsetting No. 15/20 Yale University 11-9 at Reese Stadium.

The UMass offense came into the game struggling to find its rhythm, averaging a pedestrian six goals per game. That offense came to life against Yale, led by sophomore Tyler Bogart. Bogart matched his season total with four goals in the contest and scored the game-winning goal with 2:18 remaining off a pass from Dom St. Laurent to break a 9-9 tie.

The Minutemen were able to take advantage of the Bulldog’s mistakes throughout, capitalizing on all four man-up situations they were given. The four man-up goals all came in a seven-minute stretch, spanning the final minute of the first half and first six minutes of the third period. The final man-up goal gave UMass a 9-5 lead with just under nine minutes to play in the third period.

Cannella continued: “We shot the ball well and had good opportunities. [Grant] Consolleti made a good feed to Jeff Trainor, and Jeff made a really good decision on the goal. He scored by pump faking someone. [Ben] Spencer took a really good shot from up top too. The shooting was there.”

Going into the game, Cannella knew his defense would need to have one of their best games of the season to pull off the upset. Yale entered the game averaging 11 goals per contest, but struggled getting the ball past UMass goalie D.J. Smith. The Bulldog offense kept pressure on Smith with 38 shots, but Smith stood on his head and stopped 11 shots.

“In the beginning of the game we won the faceoffs,” Cannella said. “We played a little bit of zone and played really good defense. D.J. was outstanding in the goal.”

Each team went on large scoring runs in the game. The Minutemen opened up a 3-1 lead to start the game. Yale answered by scoring two goals of its own, followed by a pair of UMass goals by Bogart.

The Bulldogs then rattled off two goals to tie the game at five in the second period. Trainor scored the team’s first man-up goal with 1:05 remaining in the first half to give the Minutemen a 6-5 lead when the teams broke for halftime.

Yale followed up the UMass run with a four-goal run of its own. The run was spearheaded by junior attack Ben Reeves, who scored three of the four goals. Reeves finished the game with four goals on 11 shots on net and his final goal came with 8:20 remaining in the fourth quarter to tie the game at nine.

After the Bogart goal that broke the 9-9 tie, Consolleti scored the team’s final tally with 50 seconds remaining to seal a Minutemen victory. Cannella was happy his team got its first win of the year, and hopes the team continues the level of play it showed today.

“Every win you get in Division I lacrosse right now is good. It’s really hard to win games,” Cannella said. “It’s a big win but you have to move on to the next one and show up and try to be consistent with the effort we had. To win the first game of the year is always important.”