UMass men’s lacrosse will have hands full at No. 20 Yale University Tuesday 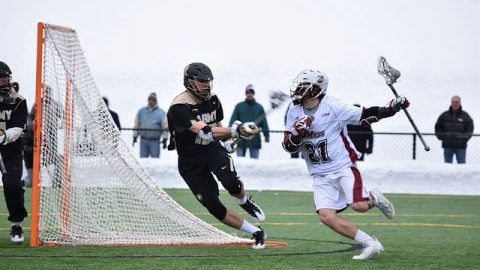 The Massachusetts men’s lacrosse team is still searching for its first victory of the 2017 season, and faces its toughest test to date Tuesday at No. 20 Yale University.

The Bulldogs (1-2) have lost two consecutive contests against No. 2 Maryland (12-11) and Bryant University (9-6) after besting Villanova University in their season opener (16-11).

Despite its record, Yale’s offense is not one to be taken lightly. The Bulldogs have 21 assists in three games, and are averaging 11 goals per game with 33 shots per game and boast a versatile attack, as 11 players have registered points so far this season.

“[Our defense] is going to have to play a really, really good game for us,” he added. “When we make saves, we have to clear the ball 100 percent. We can’t give them any second chances.”

Conversely, UMass has struggled to find its footing through four games. An underwhelming 9-2 defeat in the season-opener against Army West Point, an 11-7 triumph by high-powered Harvard in week three and a pair of losses to then-No. 20 Ohio State (8-7) and then-No. 9 Albany (17-8) have kept the Minutemen searching for a victory.

It doesn’t get any easier, as Yale is the fourth and final stop on a nearly month-long road trip away from Garber Field for the Minutemen. The Bulldogs dropped their lone home game this season at Reese Stadium in a stunning defeat to unranked Bryant.

UMass’ offense has struggled. The Minutemen have scored just six goals per game and are registering 32 shots per contest.

Redshirt senior Dan Muller leads the team with six points through four games, and is tied for the team lead in goals with midfielder Ben Spencer and attackman Tyler Bogart, who have tallied four goals apiece — a disparaging margin compared to the potent Yale offense.

“We have to finish the ball,” Cannella said. “We’ve had opportunities. Our shooting percentage is 18 percent. As a team, you should be in the mid-30s. Your attack group should be anywhere from 40-50 percent because they score closer to the cage. We put ourselves in good spots to score, we just haven’t finished the ball.

“You look at the goalie saves from other teams, Harvard I think had 21, Ohio State’s backup had 14 saves against us, Albany had 15 saves. It’s all about finishing the ball offensively,” he added. “You’re going to face good teams, good defenses, good goalies, but you should still score hopefully 10-plus goals.”

UMass goalkeeper D.J. Smith has stopped 47 shots in net this season, but has permitted an average of 11.56 goals per game. Yale goalie Phil Huffard has allowed 10.48 goals per game, which could bode well for a Minutemen offense hoping to put up a crooked number Tuesday.

“You hope something clicks for them and you hope that they see success,” Cannella said. “That’s with any team. Chemistry happens when there’s success. Good feelings, confidence come with success. Hopefully we get some of that.”

UMass hopes to upset the heavily-favored Bulldogs at 7 p.m. at Reese Stadium.