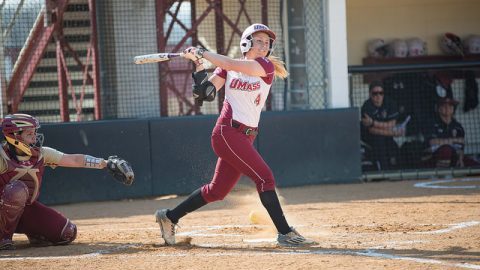 The Massachusetts softball team has struggled through its opening stretch of games, and this weekend’s trip to Mississippi was no different.

Taking part in the Bulldog Slamboree, hosted by Mississippi State, the Minutewomen (3-12) went 1-4 on the weekend, earning a win over Samford, but dropping two games against Central Arkansas, another against Mississippi State and fell in the opening game against the Bulldogs.

“I think we have still a lot of stuff to work on that can’t really be worked out at practice,” UMass coach Kristi Stefanoni said. “It’s a lot of mental stuff, staying focused in games, knowing situations, knowing how many outs there are so that we’re running the bases correctly. I think it’s just staying focused, and competing when we need to compete.”

The sole win against Samford on Saturday was UMass’ best win of the season thus far, posting a 13-0 victory. Freshman Candace Denis picked up her first win of the season, tossing five innings and striking out seven Bulldog hitters en route to a shut out.

“We had a season-high so far, 15 hits, 13 runs, we played great defense,” Stefanoni said. “It was Candace Denis’ first win of the season, I thought that was absolutely fantastic. It felt good to finally beat up on somebody else, and I know the team felt really good about it as well.”

The Minutewomen got out to a rough start on Friday, taking an 11-1 beating against Central Arkansas, before falling to hosts Mississippi State 4-1. Denis threw all six innings in the latter contest, striking out five and giving up six hits and four runs.

“I thought we played a pretty decent game against Mississippi State,” Stefanoni said. “They were very good. Candace pitched absolutely phenomenal against them.”

After dispatching Samford in just five innings on Saturday, UMass had a chance for redemption as it took on Central Arkansas, but dropped a 2-1 heartbreaker in a game that took 11 innings to resolve.

Denis continued her busy weekend in that contest, throwing 10.1 excellent innings on the rubber, giving up just three hits and two runs while setting down nine Sugar Bears on strikes. Her sparkling performance wasn’t enough though, as Cylla Hill’s walk-off single in the bottom of the 11th inning gave Central Arkansas the win.

The Minutewomen finished up the weekend with a rematch against Samford, and a four-run sixth inning for the Bulldogs was enough for the win, as UMass fell 9-5 to drop to 3-12 on the season. Junior right-hander Meg Colleran had another rough afternoon in the circle, allowing eight runs (seven earned) and 11 hits to drop her own record to 1-7 on the year.

With only a few warm-weather tournament games left to play, and less than three weeks before the start of Atlantic 10 play, Stefanoni only has a few more opportunities to tinker with lineups and iron out major wrinkles before the games really count. And although these early-season tournaments are opportunities for experimentation and reps, she has no intention of taking them lightly.

During these tournaments, it becomes a balance of getting reps for some younger players, while still trying to be competitive.

The Minutewomen will head to California this weekend to take on UC Davis, Seton Hall and Iowa State, before taking on Lehigh and Pacific in the middle of next week.

UMass opens A-10 play against St. Bonaventure at Sortino Field on March 25.