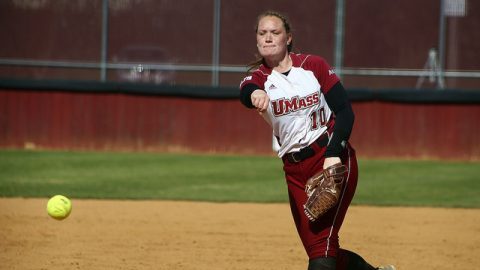 It’s been an interesting first week of the conference schedule for the Massachusetts softball team.

After getting rained out of its first two scheduled matchups during the opening week of play, UMass will travel to Boston University on Thursday to take on the Terriers (8-18) for a midweek doubleheader.

The two teams didn’t meet last season, but Minutewomen coach Kristi Stefanoni sees this first matchup of the season as an extremely useful one.

“They’re the Patriot league [champions], went to regionals last year and have played a competitive schedule to date,” Stefanoni said. “We’re looking for a good, competitive two games against them.”

It’s been two weeks since UMass (8-14) has taken to the diamond in a real game setting and, according to junior Meg Colleran, the start of this season’s conference schedule can’t come soon enough.

After the Minutemen got off to a slow 3-14 start and enduring struggles at the plate, UMass turned things around in recent matchups and showed major improvement over its final two non-conference tournaments in California.

According to sophomore Kaycee Carbone, the bats coming alive was a long time coming for the Minutewomen.

“It was a major breakthrough for us,” Carbone said. “We had been just getting singles for so long but no multi-base hits, so when people started hitting doubles, triples and home runs, it was huge.”

Riding a five game win streak into the start of conference play, the UMass offense is producing at a rate which it hasn’t seen this season until now.

Led by sophomores Kaitlyn Stavinoha, Erin Stacevicz and Carbone, the Minutewomen rank sixth in the league in hits with 141.

Stavinoha leads the team at the plate with a .348 batting average. She has 18 runs batted in and a grand slam so far on the season, which came in front of her whole family during a 5-4 loss to Saint Francis in Florida.

Moving into Thursday’s doubleheader, the sophomore has started all 22 games for the Minutewomen and reached base in three straight.

According to Carbone, Stavinoha’s performance to start the season has been a monumental one.

“I think [Stavinoha] basically has all of our RBIs right now,” Carbone said. “She’s absolutely killing it out there and I’m so happy for her.”

Stacevicz sits just behind Stavinoha for the team-leading batting average, hitting .308 with a remarkable 24 hits and 15 runs scored.

Carbone, who leads the team with seven-straight games of getting on base, is batting .262, good for fourth on the team.

In the circle this weekend, Stefanoni expressed that it is, “more than likely that [Colleran] and [Candace Denis] will be starting a game apiece.”

Denis boasts a conference-low 1.75 ERA on the season, and has shined in her first stint of play with the team. On Thursday, she looks to bring her success to the elevated stage of conference play.

Colleran got off to a slow start at the beginning of the season, but showed tremendous improvement in the latter California tournament games, which she hopes can continue against the Terriers.

“I think I’m finally starting to get back to where I need to be,” Colleran said. “Coming into the season I started off a little bit rougher than I wanted to and definitely wasn’t performing the way that the team needed me to.”

According to Stefanoni, Colleran’s season presence wasn’t all of what the results on paper made it out to be.

“[Colleran’s] done a really good job of keeping her head and being mature,” Stefanoni said. “She’s working really hard and being a great role model for our young staff.”

But after a complete game effort and 7 innings against UC Davis and Lehigh, respectively, the junior righty seems to be getting back on the right track towards consistent success in the circle.

Thursday’s games will take place at the BU Softball field, where the first game will begin at 2 p.m., followed by a rematch after the conclusion of the first.

Liam Flaherty can be reached at [email protected] and followed on Twitter @Liam__Flaherty.