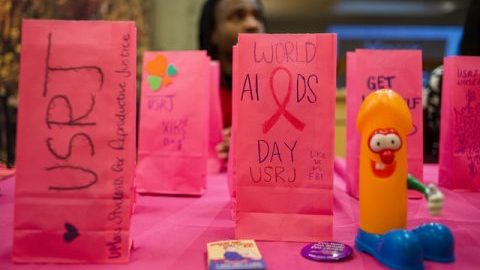 Officially re-formed with its new name in the fall of 2016, UMass Students for Reproductive Justice is self-described as one of seven chapters in Massachusetts that are part of an international organization allied with Planned Parenthood.

USRJ exists to “educate the university community about reproductive health and rights, to translate increased awareness into pro-choice activism on campus and to serve as a coalition partner to state, national and international reproductive rights efforts,” according to the Facebook page for the group.

Josie Pinto is the president of USRJ, as well as a research and education coordinator at the Stonewall Center and public health sciences major.

“We can now be involved in activism in the ways that we would like,” Pinto said.

One important form of activism that has just finished its second year running is the student-written, student-run performance showcased by USRJ, “Nostras Voces.”

Katie Donegan, a journalism and communication major, is the co-president of the organization.

“I’m a believer that performances like that are activism,” Donegan said. “‘Nostras Voces’ is more representative of students, and we’re proud of that.”

With “Nostras Voces,” USRJ is pushing to become a more inclusive and welcoming organization.

Donegan said a large part of the show is to demonstrate “moving away from the notion that genitals dictate gender and vice versa.”

“That’s an antiquated concept,” she said. “We no longer are encouraging that.”

Donegan said that especially as a journalism and communication major, she is well aware that representation matters.

“Seeing participants who are queer, people of color, trans women, trans men, questioning, survivors,” Donegan said, “it’s empowering to be able to watch people share their stories and experiences in their own way — not through others who may be seen as speaking for them.”

Krystal Kilhart, a sophomore BDIC women and gender sexuality studies and international relations major, has been a member of the organization since the spring of 2016.

She emphasized the organization has encouraged her to promote new and improved perspectives not only for herself, but also for those around her.

“Some of my personal goals are to spread awareness about reproductive justice and the spaces and resources available in the Five College area,” Kilhart said. “I also hope to listen to others and learn from them.”

According to Pinto, about 30 people make up the organization overall. Each meeting of the group starts with each member reintroducing themselves with their name, pronouns and a high and low of their week.

USRJ is currently working on a PowerPoint presentation to give to the Women’s Health Clinic at University Health Services. So far, a short list of demands has been drafted as improvements that the organization believes are important for the clinic.

Two of their top requests are to increase visibility and transparency on offered services, as well as more specific training for LGBT+ patients.

Another demand that the organization is currently looking into is having the abortion pill provided at the health center.

“We wouldn’t be the first college to petition for it,” Pinto said, surprised at her findings about a recent bill introduced in the California Senate, which would require health centers at publicly funded colleges to provide abortion pills for students.

“The demands we are putting forward to the Women’s Health Clinic are important to me because I believe access to healthcare is a universal right,” Kilhart said. “I also believe that people should have access to competent and comprehensive healthcare services without facing discrimination.”

During the meetings, members break up to participate in a “VOX Talk.”

“These talks are an opportunity for members to discuss their opinions and new ways of thinking on perhaps difficult subjects to talk about,” Kilhart said.

“For me, this organization is a place that strives to be inclusive and pass the mic so people can share their experiences rather than being placed into a certain category or generalized,” Kilhart added. “As a group we constantly question the motives of certain movements and terms and try to avoid stereotyping people or reinforcing binary ways of thinking.”

“The ‘Justice’ in the organization’s name is from a framework developed by women of color to have a more inclusive overall movement,” Pinto said. “Intersectionality is vital to our organization, we want to center the most marginalized and own our privilege.”

At the end of meetings, members are reminded of the organization’s motto written on the board hanging on the wall: “What is said here stays here, but what is learned here leaves here.”

Weekly meetings of USRJ take place on Wednesdays at 7:00 p.m. in room 413 of the Student Union. The group has also an updated Campus Pulse and Facebook page, and you can contact Pinto at [email protected] with questions.

Rachel Walman can be reached at [email protected]