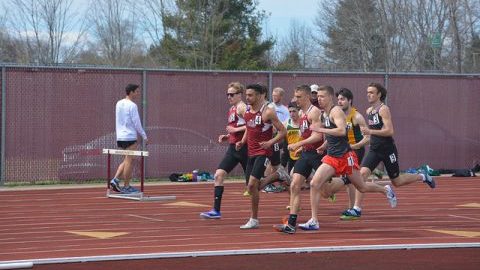 The Massachusetts track and field teams finished their season over the weekend at the ECAC and IC4A Championship meets in Boston. As UMass will not be sending an athlete to the NCAA Championships in Texas, the team will have four weeks to rest and recover before going out for the outdoor season opener, scheduled to kick off April 1.

At the meet, the Minutewomen saw two athletes who have been peaking in their performances improve once again to set the bar even higher for their own school records. Sophomore Emilie Cowan set her new record for the 500-meter run on Sunday in the finals running 1:10.84, good for second in the meet. Another athlete to break her own school record this weekend was senior Kelsey Crawford. Her shotput mark of 47 feet, 9.5 inches bested her previous New England Championship winning throw by 1.5 inches. This toss landed Crawford in fourth-place this weekend.

Ultimately, the Minutewomen finished 18 out of 44 teams in this meet. The team scored 17 points this weekend, which were contributed in part by freshman Samantha Thompson. Her 5 foot, 6-inch leap in high jump was good for a tie for fourth in the event.

Other athletes in action this weekend included redshirt sophomore Diamante Spencer. Her time of 24.92 seconds earned her a 16th place finish. This run is a personal best for Spencer, who improved upon her number two spot.

Additionally, the 4×400-meter relay team of junior Julia Witt, Cowan, sophomore Olivia Weir, and sophomore Elizabeth Gulino ran a combined time of 3:49.09, which is third in the UMass record books and found the squad in 17th place in the event.

While the Minutewomen were competing in the ECAC Championships, the Minutemen were at the IC4A Championships. Junior Brian Gendron improved upon his own school record in the 800-meter dash, running a 1:50.90. This run was good for sixth in the preliminaries on Saturday and he would go on to retain that position on Sunday with a performance of 1:51.13. Meanwhile, teammate Russell Wells improved to second all time in the UMass record book in the same event, running 1:52.10 in Saturday’s preliminary race. This performance was good for 12th place and just short of Sunday’s final.

The distance team was also well represented in the mile, with two athletes taking on Saturday’s preliminary. Sophomore Zachary Frahlich and senior Cory Thomas were pushing each other well for the full eight laps, running 4:10.04 and 4:10.53, respectively. These performances were just short of the final, with Frahlich and Thomas in 11th and 12th place, respectively.

Freshman Hunter Gray also saw action in the heptathlon. His performance allowed him to take seventh in the event. His performance was aided by his third-place finish in the 1000-meter run (2:48.41) and two fourth-place finishes in the jumps. He cleared 6 feet, 1.25-inches in high jump and 22 feet, 2.75-inches in long jump. This allowed Gray to score a total of 4,797 points, good for third all-time in UMass program history.

UMass coaches Ken O’Brien and Julie Lafreniere could not be reached for the time of this publication.

As the 2017 indoor track season ends for UMass just in time for spring break, the athletes will be recovering and getting ready for another season on the outdoor track beginning April 1 at the Central Connecticut State University Invitational in New Britain, Connecticut. That meet is set to begin at 10 a.m.