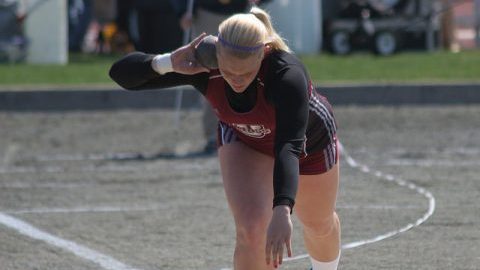 With a snowstorm in the upcoming forecast for the weekend, it may be hard to believe that the outdoor track season is rapidly approaching. That being said, the Massachusetts men’s and women’s track and field teams will be traveling to New Britain, Connecticut for the Central Connecticut State University Invitational this weekend to kick off its 2017 spring campaign.

The indoor season wrapped up for UMass just three weeks ago with the IC4A/ECAC Championships, but the athletes have been diligently preparing for the spring. Associate head coach David Jackson is a specialized coach with field events and short hurdles, and described what his athletes have been doing in the short offseason.

“We tapered shortly after indoor, but after spring break we got after it in the weight room, moving around some serious weight,” Jackson said. “We have about one more week of that and then we go back into the taper cycle.”

Several athletes set themselves apart with stellar performances during the indoor season and will be back for outdoor. For the men, the distance team will likely be a major contribution to the Minutemen’s points haul. Seniors Morgan Marlow and Paolo Tavares, junior Brian Gendron and sophomore Zachary Frahlich had great seasons in the previous campaign and look to build on it outdoors. For the distance team, two seasonal events that create additional opportunities for points are the 5,000 and 10,000-meter run. Look for cross country veterans like Marlow and Frahlich to open up to larger distances to try and secure points for UMass.

For the Minutewomen, the two stars of the indoor campaign were sophomore Emilie Cowan and senior Kelsey Crawford. Cowan showed impressive range, winning races from the 400-meter dash to the 800-meter run. Cowan already has a handful of school records and will be looking to set even more this season. As for Crawford, she already holds the record in shot put with a throw of 47 feet, 9.5 inches and will also compete in the javelin throw, where she finished third last year at the New England Championship meet.

Another exciting athlete making a return is redshirt junior Heather MacLean. She did not compete in the outdoor season and is hoping to qualify for nationals along with Cowan. With a personal best of 4:37.80 in the mile, MacLean is now healthy and will be a major asset in the distance events and on several relay teams.

Although everything seems ready to go for Saturday on paper, mother nature may have other plans. New England is expecting yet another snowstorm this Friday and Saturday, which could make plans for the first track meet a challenge. CCSU is in New Britain, Connecticut, which luckily has been forecasted for less snow than Massachusetts, but inclement weather may yet cause Jackson to tell some athletes to stay home.

“If it’s drizzling and 38 degrees out, my pole vaulters are not jumping,” Jackson said. “I tell them to stay home and sleep.”

This meet will open a jam-packed season for UMass. Saturday’s competition will be the first of seven invitationals for both teams in just six weeks. There will be opportunity for new stars to rise and mainstay performers to showcase their talent. With four meets at home this season, the Minutewomen will have a chance to perform on campus, making their travel schedule much easier.

Saturday’s meet begins at 10 a.m. with the first home meet just six days later at the UMass quad meet for the Minutewomen set for April 7.