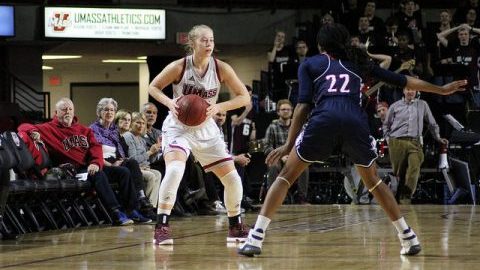 On paper, it would appear the Massachusetts women’s basketball team took a step back this season. Their win total dropped by three games and they finished the season on an 11-game losing streak that was capped off by a 40-point blowout in the first round of the Atlantic-10 tournament.

But what’s on paper doesn’t always tell the whole story. Tory Verdi’s first year as the head coach at UMass saw the program move in a positive direction despite what the disappointing numbers might say.

Verdi was given six scholarship players to work with this season, just enough for a starting lineup and one bench player. The Minutewomen recruited senior soccer star Megan Burke to play for them, who had not played basketball since her senior year of high school. With a bench of just two players on the UMass roster, the odds weren’t in the Minutewomen’s favor at the end of games, as tired legs would run out of steam.

Even while the team struggled to win games, the culture was improving. UMass’ last tournament appearance was in 1998 and the program showed no signs of making it back under former coach Sharon Dawley. Verdi’s first task was changing the culture of the program into one that focused on winning games.

“The program did take a step forward this year because the biggest thing that needed to occur was changing the culture,” Verdi said. “When I say change the culture, you change the expectations. The kids, the players, our program, they know what needs to be done in order to win a championship.”

Verdi continued: “It’s been a difference. They know its been different from years past to where it is right now. This year, it wasn’t good enough. We as coaches, I think my coaching staff has done a wonderful job, need to be communicating and leading by example. These are the things we need to do.”

The biggest bright spot for the Minutewomen this season was freshmen Hailey Leidel. Leidel led the team in scoring this season with 15.5 points per game, making her the second highest scoring rookie in the country and was rewarded by being named the A-10 Rookie of the Year. Verdi was impressed with the way Leidel was able to make an instant impact offensively for his team.

“[Scoring was] something we needed. We didn’t have a whole lot coming into the season. For a freshman to step up and lead your program in scoring is a big deal. The fact I have another three years to coach her; I’m pretty excited about that. You have that point production coming back and I think her best basketball is ahead of her,” Verdi said.

Aside from Leidel, UMass is graduating just two seniors, Alyx Stiff and Burke. The team is still looking into junior college kids to add to the team but already has five new commitments for next year. One of those players is a transfer from Florida Atlantic and the other four will be incoming freshmen. All four of the freshmen being brought in were 1000 point scorers at their respective high schools, something Verdi looked for in his recruitment.

“That’s what we’ve needed,” Verdi said. “More than anything we need players who can put the ball in the basket. We need to be able to shoot from the perimeter. We need balanced scoring. We need an outside presence; we need an inside presence. We need a point guard who can create for herself and others and be able to score.”

“We’re looking to continue to bring in players who can make an immediate impact and I believe the five we have committed so far are going to play right away,” Verdi said.

While it may appear that UMass is trending down after a disappointing season, that is far from the case. With added depth plus the loss of only two seniors, the Minutewomen should see drastic improvement in Verdi’s second year at the helm.