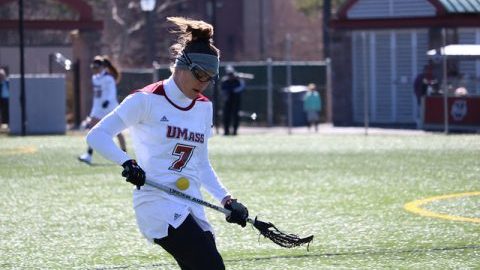 While some students and other Massachusetts athletic teams spent their spring breaks in tropical destinations posted up on the beach, the UMass women’s lacrosse team had a much different experience.

The Minutewomen (3-3), who are currently on the tail end of an 11-day break between games, instead spent a portion of their time off not practicing on the turf on Garber Field, but inside Boyden Gymnasium, doing basketball drills.

“It was definitely a good time. It was fun to just kind of get up there and play some different sports,” senior defender Allison Ryan said after practice on Monday.

“Basketball and lacrosse relate well together,” Ryan said. “There’s a lot of picking and there’s a lot of movement, so it was kind of fun to get outside our comfort zones because a lot of us are so used to getting out here and playing with our sticks. I think it allowed us to really see different parts of the game. I think it was really important and we gained a lot out of it. We really focused on a lot of the small things up there and I think it was pretty helpful because a lot of us have been doing really well.”

Following the snow storm that swept across the Northeast last Tuesday, UMass spent Wednesday and Thursday of last week doing basketball drills to help with the offensive movements, defensive rotations and communications when defending other team’s screens to free up their attackers.

“We needed to focus on our movement, kind of off-ball movement. Some of it is just fundamentals of the sport,” Roche said after practice Monday. “A lot of that background comes from players that have played other sports. Now, less and less players are playing basketball. Players aren’t playing hockey when they come in here.”

Roche also thinks that basketball drills teach the Minutewomen different ways to get open when operating in their offensive sets.

“We used a lot of those two-man games and three-man games within our offense,” Roche said. “We’ve definitely seen an improvement on the field but it took a two-day commitment to see that change. We really had to commit to doing it. There were no lacrosse balls, no lacrosse sticks. We were just learning those skills.”

“It was a lot of sliding, movement, picks,” Ryan said of the indoor workouts. “We actually did a lot of offensive work too. A lot of it coincided well together. The defense learned a lot and the attack. We were basically picking and rolling and doing different movements and kind of learning how you come off of picks defensively and just communicating. I think that’s one of the most important things right now. We’re really working on our communication and how we recover off of mistakes.”

With the majority of its layover now behind itself, UMass next turns its focus to Harvard on Wednesday. The Crimson (4-2, 1-0 Ivy League) feature two prolific goal scorers in senior Marisa Romeo (21 goals) and sophomore Keeley MacAfee (17) when the two meet.

Thanks to a loaded schedule to start their season against two ranked opponents, the young Minutewomen defensive core has allowed opponents to score an average of 12 goals per game. Recently, however, UMass has worked out some of its early-season kinks and has held its two most recent opponents to single-digit goals.

“I think every team faces adversity at some point in their season,” Ryan said. “Ours was in the beginning because we were facing really tough competition. We had new players too. I think people have really been adjusting well. Kristen Lomanto, Sarah Crowley, they’ve been doing great.

“I think the biggest part of our defense is communications and it’s all about creating a bond between each other and I think we’ve done that,” Ryan added. “I think this break was a huge part of that too. I think this 11-day break really kind of cemented our bond and our connection and we’re really looking forward to this upcoming game.”