We voted and they endure: Trump’s effect on the global community 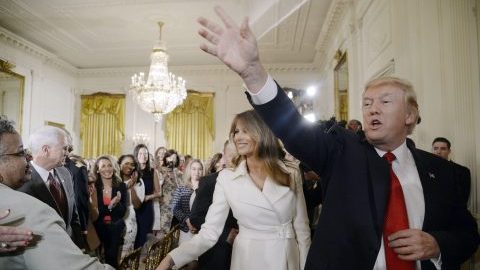 To be honest, I do not feel great pity for Trump supporters dependent on the social services he is determined to eliminate. Though he employed rhetoric of populism and made overconfident promises to make our country “great again,” his campaign was filled with explicit hatred and was dependent on large-scale xenophobia. As a nation, we appointed a manipulative and dishonest sociopath to our highest office and as a nation we will experience a number of challenges during his presidency. We allowed our fear and our deep-rooted racism to undermine democracy and human decency, and yet his election was an active choice. What I cannot accept, however, is the grave and immediate danger that the Trump administration has created for those who had no voice in our circus-like elections.

This administration is actively committed to decreasing access to healthcare, particularly for women. Trump’s global gag rule prevents foreign aid from going to organizations that either perform or promote abortion as a form of family planning. This order does not apply to U.S. organizations because it violates Americans’ First Amendment right to free speech, but no such right exists for recipients of foreign aid. The vague phrasing of the rule means that many organizations afraid of losing U.S. funding proceed with the utmost caution, declining to advocate or even discuss abortion as an option. In Africa, where every year six million pregnancies end unsafely, this gag rule will further endanger women in already precarious situations. Ultimately, the rule will diminish access to essential contraception, HIV/AIDS treatment and natal care globally.

True to his word, Trump’s foreign policy appears to be defined primarily by his fascist campaign slogan “America First.” Beginning with an immigration ban for seven Muslim-majority countries, the administration attempted to bar holders of temporary visas (students, workers and visitors) and refugees from Iran, Iraq, Syria, Yemen, Somalia, Sudan and Syria. Many refugees now live in brutal conditions on the outskirts of poor societies while their once feasible objective of resettlement to the United States grows increasingly unlikely.

Beyond his racist immigration ban, Trump seems eager to alienate key allies. Trump abruptly ended a phone call with Australian Prime Minister Malcom Turnbull after being asked whether he would honor an agreement to accept some of the refugees that have found temporary accommodations in Australia. Trump’s administration has lobbed unfounded claims at the U.K., claiming that its intelligence agency was guilty of providing “Obama with transcripts of Trump’s calls.” During a meeting with German Prime Minister Angela Merkel, Trump did not shake Merkel’s hand though she offered it twice.

Trump has openly challenged the value of the North Atlantic Treaty Organization (NATO), an organization that works to “safeguard the freedom and security of all of its members by political and military means.” Calling it “obsolete,” Trump’s administration has yet to appoint a NATO ambassador. Secretary of State Rex Tillerson will make his first trip to NATO headquarters in Brussels this week, where he is expected to reiterate Trump’s demands that member countries increase their military spending. Tillerson had initially attempted to avoid the meeting, citing a conflicting arrangement with Chinese President Xi Jinping and a planned trip to Russia, but the NATO meeting was rescheduled for his sake.

Our decision to elect Donald Trump has already made the world less safe and less cooperative. Like most choices, the one we made as a nation on November 9th has implications far beyond what we expected. We hold the privilege of citizenship in the most influential country in the world and we’ve demonstrated once again that, perhaps, we do not deserve such positions of power.