Why hasn’t the Equal Rights Amendment been ratified? 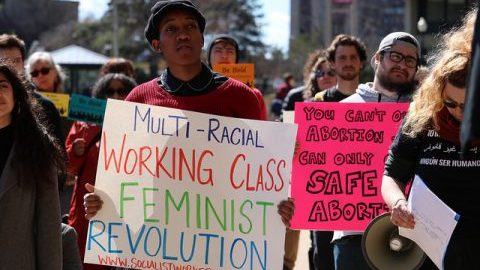 After the excitement of the Women’s Marches on Jan. 21, which occurred all over the country and the world, women’s rights have been a constant topic in the news.

Historically, women have been discriminated against. After all, we only won the right to vote a little less than a century ago with the passage of the 19th Amendment in 1920.

We have come quite a long way since then, but there is still much work to be done. We have always fought for equal rights, whether it is for our bodies or our vote. Just look at how legal attitudes toward marital rape began to be disputed, and were brought to the public’s attention in 1979.  Prior to 1979, it was believed that a man couldn’t rape his wife, since they were married. Marital rape is now outlawed across the country.

The gender gap still exists, even though the Equal Pay Act was passed in 1963. Some argue that this is because women may become pregnant at some point during their tenures, which would theoretically affect their work. There is much debate about how the wage gap is calculated, but I won’t get into that right now. I could write pages on pages about the lack of women in STEM or the lack of women in politics.

All of this is happening today, but we would not have come this far and be fighting these fights if it hadn’t been for the 19th Amendment, which protects our right to vote, thus making us citizens like men under the Constitution. But, this Amendment does not provide protection to women across the board. The 19th Amendment guarantees the right to vote, but does not protect women’s rights in any other way.

In 1923, an amendment to guarantee women’s equality across the board was written. It read “Men and women shall have equal rights throughout the United States and every place subject to its jurisdiction.” The amendment went on to be introduced in every session of Congress until it passed in ratified form in 1972.

Like many amendments, it was a tough battle to ratify the Equal Rights Amendment. I remember learning about it briefly in AP U.S history, where we learned that it was not ratified by enough states by 1982 for it to become an amendment. Since 1982, the amendment has been reintroduced to every session of Congress, but to no avail. So why aren’t more people upset by this? As a country that prides itself on equality between men and women, why can’t we as a nation ratify this amendment? While it was being ratified, many groups started to become part of the conversation around it. Feminist organizations were created to advocate for it, which generated a conservative backlash.  A campaign lead by Phyllis Schlafly promoted traditional roles of women, and her group, “Stop ERA,” warned of the changes to the family and to marriage if this amendment were to be ratified. The group claimed that women would be able to be drafted and would lose children in divorce proceedings if this amendment was to be ratified by states. Schlafly and her group were able to stop the amendment, as it only gained approval from 35 states, instead of the necessary 38.

It blows my mind that as a woman, I still do not have the same rights guaranteed to myself as a man. Some may argue that women do not need an amendment to provide them with equal rights, as we have other laws to prevent discrimination. While passing this amendment may be just symbolic at this point, a country that depends so heavily on its Constitution should amend it to give women equal rights and protection under the law.

Is passing this amendment still a possibility? There may still be some hope. On March 22, Nevada ratified the amendment, making it the 36th state to ratify. It was the first ratification in 40 years, and passage requires 38 states to ratify (if Congress still views the ratification process as ongoing, something which has been a point of dispute). This passage comes on the tails of the Women’s Marches and displays of female empowerment, such as the “Fearless Girl” statue on Wall Street.

Activists trying to get the final two states to ratify the amendment believe it can be done. Only two more states are needed to pass the amendment and, if it is ratified, it is argued that it wouldn’t be too late, as the 27th Amendment took 200 years to pass. Equal Rights Amendment bills have been introduced in six states in 2017.

State Senator Pat Spearman said it best when the Equal Rights Amendment bill passed in Nevada: “This bill is about equality. Period.” And I hope this means that this bill will be advocated for and eventually ratified so that women can truly be equal under the Constitution, almost 100 years after the 19th Amendment was ratified.