Zach Lewis and Zach Coleman reportedly to transfer from UMass 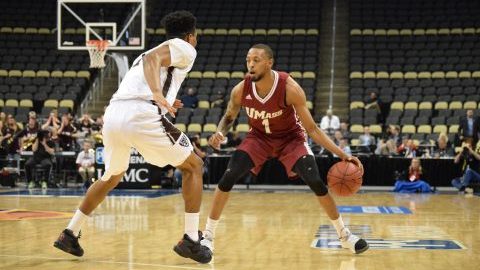 Newly introduced Matt McCall will reportedly have to coach the Massachusetts men’s basketball team next season without Zach Lewis and Zach Coleman, as both have elected to transfer as graduate students.

Lewis’ decision to transfer was reported by New England Recruiting Report Friday afternoon. Shortly after, Mark Chiarelli of MassLive tweeted that Coleman would also be leaving UMass. It is worth noting that Coleman retweeted Chiarelli’s initial tweet.

Having completed their degrees with a year of eligibility still remaining, both Lewis and Coleman will be able to transfer without having to sit out a year.

A native of Windsor, Connecticut, Lewis transferred to UMass from Canisius College following his sophomore season in 2015. After sitting out a year due to NCAA transfer rules, the redshirt junior guard played in 33 games for the Minutemen, averaging 8.8 points in 2016-17.

While Lewis was primarily used as a weapon off the bench, he picked up eight starts including two in the Atlantic 10 tournament.

Coleman’s role for the Minutemen has been up and down since his first season at UMass in 2014-15. In that season, Coleman logged 329 minutes in 32 games. This past season, Coleman’s minutes dropped to 98 over the course of 13 games. Coleman battled knee and other injuries throughout his career with the Minutemen.

With the reported losses of both Coleman and Lewis, UMass could also be without its leading scoring from last season.

According to a report from Matt Vautour of the Daily Hampshire Gazette, Minutemen guard Donte Clark is reportedly considering declaring for the NBA draft without an agent.

Per NCAA rules, Clark would not lose his senior year of eligibility if he withdraws from the draft prior to May 24 deadline, and if he does not sign an agent. The deadline to apply for the draft is April 29.

UMass athletics has not updated its roster to reflect any of these roster moves.