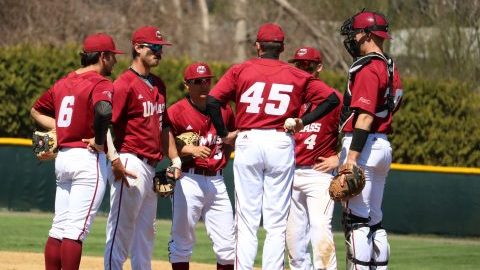 It was the second straight game the Minutemen (7-20, 2-6 Atlantic 10) gave up six runs in an inning. After holding SLU scoreless for the first three innings, Brooks Knapek and the Minutemen defense struggled in the fourth. The Billikens (21-10, 5-4 A-10) scored six runs on six hits and two errors in the inning.

“It is all about damage control,” UMass coach Mike Stone said. “We need to make the play, make the pitch to avoid giving up this big innings but it is really hurting us.”

Parker Sniatynski led off the fourth inning with a single and three batters later, Devin Mahoney hit a two-run double to give the Billikens the lead. Trent Leimkuehler kept the scoring going with a two-run single and then the Minutemen defense lost its way.

Leimkuehler stole second and an errant throw from Minuteman catcher Matt Bare advanced Leimkuehler to third. The very next play, Aaron Case reached on a fielding error by center fielder Dylan Morris that allowed the Billikens’ fifth run to score. Nick Reeser finished off the scoring for SLU with an RBI single.

After allowing six runs in the top of fourth, Stone relieved Knapek for Casey Aubin.

“Brooks threw some pitches over the plate,” Stone said. “We were not helping him defensively and really beat ourselves. We should’ve been out of that inning giving up maybe only a couple runs but it escalated because we made mistakes.”

SLU tacked on two more runs in the fifth inning behind a Cole Dubet two-run single. Aubin, however, did not surrender another run through the final four innings. He finished the day with two runs on three hits with three strikeouts in 5.1 innings.

Offensively, the Minutemen struggled to score runs again. They managed only one run on a single by Ryan Lever that was booted in the outfield allowing Eddy Hart to come home.

“We haven’t gotten the big hits recently,” Stone said. “It’s the best time for hitter to hit. We just need to come through with runners in scoring position.”

UMass left six runners in scoring position and 10 runners on base. They have lost 11 out of their last 12 games and are being outscored 98-21 in those loses. UMass has been shutout in four of the 11 games.

The two teams will have one more shot at the Billikens as they close out their series Saturday. First pitch is scheduled for 12 p.m.

“We need to get out to a good start and sustain pressure throughout the game,” Stone said. “We need to play with a sense of urgency.”

Tyler Fiedler can be reached via email [email protected] or followed on Twitter @Tyler_Fiedler.