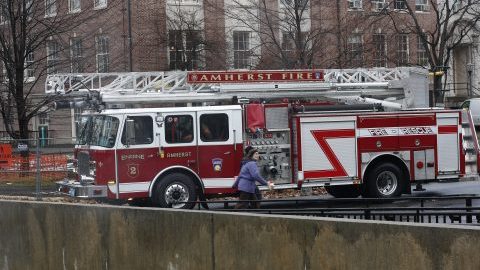 Despite open burning season ending in less than a week, Western Massachusetts fire departments are still warning residents of the dangers of brush fires — a frequently man-made hazard, common across the state.

Running from Jan. 15 until May 1, the open burning season is a period in which the Massachusetts Department of Environmental Protection (MassDEP), allows Massachusetts homeowners to burn brush, cane, driftwood and forestry debris with permission from their local fire department and a permit.

In Western Massachusetts, towns like Amherst, Belchertown, Hadley, Warren and Southampton, fire departments have had to put out multiple brush fires over the course of the open burning season. While for some of these fire departments brush fires have been regular and not incredibly problematic, for others they have proven to be more dangerous.

“It certainly had the potential of being a tragic fire,” said Southampton Fire Captain Patrick Eline about a brush fire that burned 12 acres of land on April 16. “It was a very large area and with the wind and the heat and the fuel that was on the ground, it really began to take off.”

The fire began near 199 Brickyard Road in Southampton and extended out into a field parallel to Valley Road. According to Eline, the brush fire started on the ground, and the wind then spread it to a pine tree. From there, the fire created its own wind and spread to the other trees.

Eline noted that three houses were in danger of being burned down.

“Our biggest concern was protecting those houses,” he said.

Investigators are still working to pinpoint the exact location and cause of the brush fire. However, Eline said, “We fear it may have been caused from burning the day before.”

The Southampton Fire Department has had to deal with approximately six small brush fires over the course of the open burning season. According to Eline, some of the fires were due to people taking ashes out of their woodstove, which were then spread by wind and ignited a fire. Another brush fire was caused by unauthorized burning, and a few were attributed to undetermined causes.

For Amherst Fire Chief Tim Nelson and the rest of the Amherst Fire Department, brush fires have been a minor problem this open burning season.

“We expect to get them. We haven’t had anything,” Nelson said. “It’s a regular occurrence. It really is. We have had a lot of rain, but as the surface gets dry and the rain sinks down, it will tend to spark quicker.”

“It is very rare for a brush fire to be naturally ignited,” Nelson added. “Someone drops a cigarette. Someone is out burning brush. It’s rare that it’s just because of lightning or something.”

According to former University of Massachusetts Professor William A. Patterson III, who taught a course on forest fire control at the University, lightning is a major fire ignitor in almost every region in the United States, besides the Northeast.

Instead, Patterson III noted that mostly all brush fires in Massachusetts are manmade, either caused from recklessness, not following proper fire safety directions or caused intentionally out of malice.

Patterson has been retired for seven years but now teaches a fire safety course on a volunteer basis to students from the five-college community and to members of the public. The course gives students a S-130 firefighting training permit, certifying them as wildland firefighters. In many instances, according to Patterson, his students have gone to work in Western states fighting wildfires.

Patterson noted that in many states, fire regulations differ, citing how in Maine one can burn brush at night, and how in other states, there are no restrictions for burning brush.

“Be careful with smoking material,” Nelson said about burning brush in Massachusetts. “Dispose of them directly. When you’re out burning your brush … don’t let it get out of hand, especially on windy days.”

In relation to the MassDEP’s burning restrictions, homeowners are not allowed to burn grass, hay, leaves or stumps. Fires must only take place between the hours of 10 a.m. and 4 p.m. and 75 feet away from all dwellings.

Even if one has a permit to make a fire and is abiding by MassDEP’s guidelines, a local fire chief in consultation with the State Fire Department may say that open burning is not allowed for the day.

Other restrictions on open burning can be read found on MassDEP’s website.