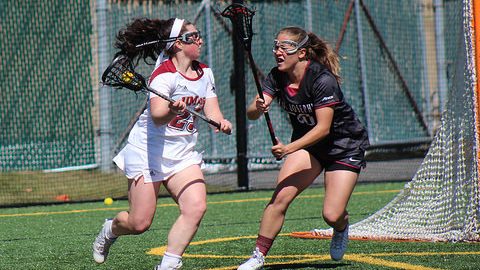 If the University of Massachusetts women’s lacrosse attacker Callie Santos could have her way, her team would play Richmond every game.

On Sunday afternoon at Garber Field, the senior set a new career-high in goals (six) and points (seven) in a single game in UMass’ 19-13 win over Richmond.

“I think it was a complete team effort today,” Santos said. “We have a huge rivalry against Richmond and they’re such a great team. Every single year we come out to play and I was just able to put the ball away today. It could’ve been anybody.”

The Minutewomen (9-3, 4-0 A-10) didn’t have their usual production from their top three point leaders as senior Hannah Murphy, and juniors Holly Turner and Hannah Burnett combined for 10 points. That left the door open for Santos, who always seems to step up when the stakes are raised, .

“Honestly for [Santos], the bigger the game the better,” Minutewomen coach Angela McMahon said. “She thrives in that atmosphere, so I’m just glad that she’s been developing and improving. She’s a leader, not just in terms of scoring goals, but she’s just a great leader for us on the field.

Santos scored the overtime game-winner in their 10-9 victory over UConn March 5.

“[There’s] something about Richmond that gets our team really amped,” Santos added. “We’ve played them in the A-10 championship the past three years and it’s always a good game. No matter what year, no matter how our team is, or how we’re ranked, it’s always the best game of the year.”

After falling behind by two quick goals from the Spiders just four minutes into the contest, Santos responded 11 seconds later with her first of the afternoon, halting the momentum Richmond swiftly built up, and was arguably the most important of Santos’ six tallies of the game.

“Critical,” McMahon said about the importance of Santos’ first goal. “I mean they have so many offensive weapons on their team and they’re capable of going on big runs and putting a lot away. I think that was definitely a critical point for us to get going and start feeling good offensively.”

“Very important obviously,” freshman Stephanie Croke, who also had an impressive game notching a season and career high four goals, said about UMass’ first goal. “[It] switched the pace of the game in our favor.”

Santos led the Minutewomen in shots on goal as well with nine and was perfect in free-position shots going one-for-one. The Merrimack, N.H. native also corralled two draw controls which was good for third on the team behind Murphy (11) and senior Sarah Crowley (three).

The 19 goals set a new high for the most goals scored against the Spiders.

“I was happy that I was able to put it away but the key to this game was winning the draw controls, and focusing on playing our game and focusing on our game plan and that’s what we did,” Santos said.