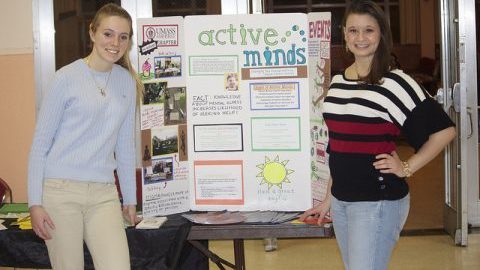 Most people in my life didn’t know about my history with an eating disorder until I wrote a column about it in the Massachusetts Daily Collegian almost three years ago. If you’ve connected with me on any social media platform since then, you’ve probably gathered that it’s a cause I care a lot about. Over the past couple of years, I’ve written for other sites like Proud2BMe and The National Eating Disorders Association blog. I had a biweekly column in the Collegian about mental health related topics. For my honors thesis this year, I brought a musical to the University of Massachusetts about a young woman with an eating disorder.

Writing that initial Collegian column was terrifying but the truth is, even though I started writing more from there, it only became scarier—not speaking about my experience with eating disorders in general, but speaking about it to an audience that might be totally ignorant of the topic and misunderstand.

So I stopped writing those columns. I decided to keep my advocacy mainly to platforms like Proud2BMe and the UMass Active Minds club because that way if someone came across it, they probably wouldn’t feel as surprised or jarred. They were already in a place where that topic would be expected. It was less in-your-face, and I ran a much lower risk of making somebody uncomfortable.

Here are some things I could say to make people uncomfortable: eating disorders have the highest mortality rate of any mental illness and they are extremely prevalent on college campuses, but they often fly under the radar. Why? Because our society praises thinness and shames overeaters into silence, perpetuating the illnesses on both ends of the spectrum. Because we don’t talk about it enough in schools. Because there are full-blown communities online where thousands of people learn about and actually support one another’s eating disorders. It is an epidemic.

I understand that it is easy to sweep an issue under the rug if it is not directly affecting you. That is what it means to have privilege. And I have learned recently that I am misconstruing a lot of my own privileges when it comes to this particular issue.

I told myself I had to stop writing columns for the Collegian and I had to stop posting my own thoughts on social media because I was taking up too much space. I told myself I was annoying, I was a killjoy, I was acting like a know-it-all when I’m not even smart to begin with. I decided it would be better to be silent and let someone more qualified take the reins.

But my silence is being filled by television commercials promoting diet pills and anti-cellulite cream. The space I feel I’m not important enough to occupy is being occupied by industries that profit from people’s low self-esteems. It is occupied by another social media post that shames fat people, and I just scroll past it. I often still choose comfort over confrontation because I don’t want people to think I am being “too much.” I still hesitate to speak or take action, meanwhile there are people objectifying me and talking over me without a second thought.

It is so much easier to work with those who are already in the field. I’m never more comfortable chatting and learning about eating disorders than when it is with people who are already advocating for change. And there is nothing wrong with that—the mental illness awareness groups I’ve connected with have some of the kindest, most welcoming and generous people I’ve ever met. They are patient and open-minded, constantly teaching me new things.

But activism is not about being comfortable all of the time. Activism is about pushing boundaries and challenging power structures as well as our own intentions. It means advocating for others, and if we stay silent because it makes us uneasy, we are only serving ourselves. We must face those who will dislike us, dismiss us and call us annoying because those are the people that need change the most. It’s exhausting and challenging and I admire those who are shamelessly relentless in their efforts.

It’s also important to realize that not everyone is in a place to do it. I have the privilege of a mouthpiece through a number of public platforms I can use to help lift others up. This semester, I was given a literal stage for it. There are stories that are not mine to tell, but the world needs to know they exist and the world needs to understand this illness. Over 30 million people in the United States alone are suffering. There is still too little research in the LGBT+, autistic, Black, Hispanic and Asian communities, to name a few, and not enough funding to lead that research.

This is happening right in front of us and we are still not talking about it enough. Mental illness can be a really difficult subject to open up about, but I am personally in a place where I’m ready and willing to continue sharing my experience and talking about why it matters—because it has affected not only me but also people I love, and it could be affecting people you love too. I will not continue to downplay my passion and prepackage it with an apology just because it makes someone a little uncomfortable.

Kate Leddy is a Collegian contributor and can be reached at [email protected] or followed on twitter @kcleddy.