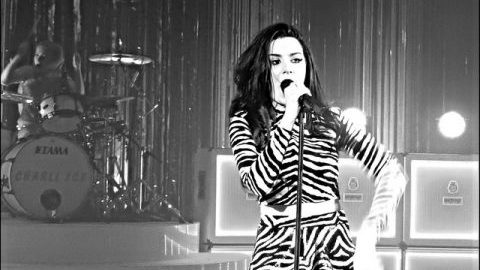 The concept of a project created in two weeks out of boredom usually wouldn’t be the least bit promising, but Charli XCX has always had nothing if not surprises up her sleeves.

With the release of “Number 1 Angel,” Charli XCX – the stage name of Charlotte Aitchison – has created a full portfolio of invigorating, empowering tracks.

What really completes this portfolio are the guest spots on “Number 1 Angel,” of which there are plenty. The project only features female artists, with over half of its tracks containing guest spots. Each of these artists represents a different style of pop-soaked hip-hop, and all of them empower one another through fast-paced, enticing performances.

This relentless energy can really be seen in the mixtape’s opening track, “Dreamer.” Aitchison, the United Kingdom-based artist RAYE and American rapper Starrah, unapologetically brag about their successes, and the work it took to get them to their lofty places in the industry. “Dreamer” is a motivational anthem, a powerful song about going after whatever you want.

The energy continues unabated in “3AM (Pull Up),” where Aitchison and MØ call out a manipulative relationship. The track goes through all of the stages of a manipulative relationship, but the artists work together to help each other out of it. The highlight of the song is Aitchison’s sly modification of the final chorus, where she contradicts her previous sentiments by singing “One thousand times, the same old story/Forgive myself, now this is over/I can’t believe you had me fallin’/No more, no pull up.”

This change of heart is a demonstration of Aitchison’s resilience in the face of adversity. It’s also important to note how the final chorus is the only one that features MØ, showcasing the strength and resilience of friendship amidst facing adversity.

On “Lipgloss,” men are submissive in character, whereas the women are dominant. Men often characterize women as sexual objects in popular music, but “Lipgloss” features Aitchison and Cupcakke powerfully turning the tables. Aitchison and Cupcakke are far more mature than their male counterparts when it comes to this sort of frank discussion, as they still take pains to highlight the importance of the sexual experience being pleasurable for both themselves and the man in question.

“Lipgloss” is incredibly fun, and shares many elements with standard bubblegum pop, but its mature lyrics make it one of the album’s strongest cuts. Aitchison and Cupcakke’s decision to push the envelope in the way that they did helps make this project a more groundbreaking experience. Aitchison’s decision to close the project with “Lipgloss” especially, illustrates her willingness to go anywhere with her music, and leaves us wanting more brave experimentation like this.

While these three tracks tend to be more aggressive and dominating, Aitchison also finds power through more vulnerable tracks like “Emotional” and “White Roses.” These tracks still possess tenacity in their production, but show another side to the pop star. Nearly every track on “Number 1 Angel” really, represents a different side of Aitchison’s immersion in the current pop landscape, but this sound-hopping may also be the project’s biggest weakness.

“Number 1 Angel” undeniably follows many mainstream trends, and at times it begins to sound factory-produced and uninspired. Some of its lesser tracks end up sounding like generic pop and hip hop, and don’t represent what this project really is, a fun experience. This blandness also unfortunately tends to seep into Aitchison’s lyrics as well. There are numerous times throughout the project where Aitchison simply sounds like she’s spouting nonsense, or at most just very elementary words. She could have brought a lot more complexity to the project, but it seems that she chose not to.

While these aspects do hinder the project, Aitchison seems to have indulged in these tendencies at least partially intentionally. Creating something like “Number 1 Angel” allows Aitchison to showcase her own take on mainstream pop trends and tropes, and uses this perspective to empower herself, her collaborators and her listeners.

Even through these redundancies, Aitchison is able to display frankness in artificial productions. She is willing to create conversations in a space where they often aren’t had at all. While “Number 1 Angel” may have been a quickly-drafted experiment, it illustrates the potential impact Charli XCX could have on the pop music landscape.