Chomsky portrays a bleak future for the environment and diplomacy 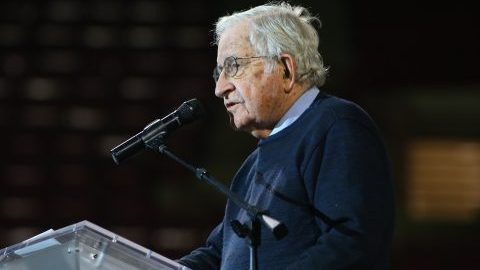 By Jackson Cote and Alvin Buyinza

Chomsky, known for his anti-war, socialist leanings, painted a bleak picture for audience members Thursday night in the University of Massachusetts Mullins Center, discussing the troubled future in store for the United States regarding its environment and diplomatic relations.

“Anyone not living under a rock should know that the danger is imminent,” Chomsky said about the rapidly changing climate.

Chomsky began his lecture, “Prospects for Survival,” by retelling a famous debate he watched between well-known astrophysicist Carl Sagan and biologist Ernst Mayr over whether intelligent life existed beyond earth.

From there, Chomsky reposed the famous question Mayr had asked in the debate: “Is it better to be smart than stupid?”

He related this question to the perpetual pattern of world leaders to choose power over global security. From the United States’ lack of action to fight against intercontinental ballistic missiles in the 1950s to the more recent rejection of a proposition to disarm North Korea’s nuclear weapons if the U.S. ended its hostile military exercises on the country’s borders, Chomsky cited a timeline of U.S. leaders prioritizing power over the sake of the world.

Chomsky did not tread lightly while on the subject of global warming either, noting that the U.S. alone drills more than 9 million gallons of oil a day.

What also drew some gasps from the crowd was Chomsky’s citing of information released by the International Monetary Fund, an international organization that attempts to maintain global financial security through the gathering of statistics and surveilling countries’ economies. He said, $750 billion in taxpayer subsidies goes to fossil fuel industries, “And that’s the free market.”

To Chomsky there are three recent events that have altered the future of environmental sustainability work:

Firstly, Chomsky mentioned the climate talks in Morocco that happened on November 8, 2016, to set the Paris climate agreement in motion.

According to Chomsky, progress was halted, as this was the night that then-candidate Donald Trump got elected as president. Trump and the Republican Party were not allowing any viable agreements to pass.

The second event, Chomsky said, occurred on March 1, when 10,000-year-old permafrost was caught rapidly melting in Canada, Alaska and Siberia. The melting of permafrost releases large amounts of CO2 and Methane, according to Chomsky.

Last, Chomsky discussed March 16, the day Australia’s Great Barrier Reef – the largest living entity on earth – was recorded to be in its most widespread and damaging state since 1998.

“We’re in the danger of handing the young people a situation that they cannot control,” he said.

Along with the Trump administration’s intended budget cuts to the Environmental Protection Agency and the Department of Energy, the Republican Party itself has “systematically destroyed” any aid towards environmental protection, according to Chomsky.

In a comment that drew some laughs, Chomsky called the Republican Party the “most dangerous organization in world history.”

“Outrageous claim, but is it wrong?” he asked the crowd.

However, at the end of his lecture, Chomsky provided some hope for the future. He referenced countries like Denmark and Germany, who have planned to use entirely renewable energy by the 2020s. China too, which Chomsky referred to as a “major polluter,” is rapidly integrating solar panels across the country, according to Chomsky.

Eddie Ongweso, a second-year political science and history major at Hampshire College, found some hope in what Chomsky was saying.

“If we actually act on [climate change], we might survive,” said Ongweso. “I’m optimistic about the long-term view.”

Ongweso added, as a college student he feels like he can do a lot to help, as he is not burdened with some of the duties associated with being an adult just yet: “In college you sort of have the safety or privilege to help, organize and learn.”

“I was hoping he’d talk more on the topic of indigeneity,” said Zadarias, who believes the root of the problem that Chomsky addressed to be colonialism.

He also challenged Chomsky, saying that in lecturing on a college campus he was reaching out to a safe crowd.

“It was very tame,” added Kohler, who believes that Chomsky’s message of hope and activism is coming a little too late. In her words, global warming is past the point of no return.

“The motion is already set. It’s a moving train that’s not stopping,” she said.