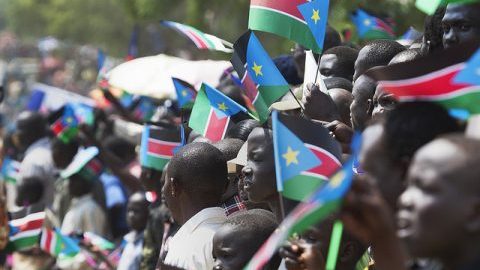 Humanitarian conflict outrages the American people. Currently, we are outraged by the Syrian civil war. Articles report each rebel advancement, each of Assad’s retaliations. Photos show the rubble, the surviving remnants of the houses and holy sites that once stood. How, as humanitarians, could we not cry at the photo of the twin toddlers, only at peace as they lay dead in their father’s arms? How, as Americans, could we not identify with the Syrians, as they fight arduously for the right to a life of popular sovereignty, liberty from an oppressive ruler, and the pursuit of happiness not only for themselves but for their posterity? We have responded with support and solidarity. From New York City to Los Angeles, Philadelphia to Washington, D.C., people have rallied together to not only protest the atrocities committed by Assad, but to prompt our own leader to welcome the refugees.

Yet where is the outrage for the South Sudanese civil war? Why is there a seeming lack of solidarity with South Sudanese people? Although occurring since 2013, and with renewed fervor since 2015, the conflict has received only minimal attention. I don’t think it is because Americans do not care, but because they do not know. Though I strongly implore for further reading and self-education on the conflict, to give context, I will give a brief background.

First, in 2011, after decades of civil war, South Sudan successfully seceded from Sudan. In a move of unity, Salva Kiir and Riek Machar, men from opposing ethnic groups, were elected to the positions of president and vice president, respectively. With a claim to their own sovereignty and rich oil fields, the world’s newest nation seemed full of promise. However, the lust for power and a history of ethnic differences has snuffed hope.

Two years later, President Kiir, who is from the Dinka ethnic group, accused his vice president, who is from the Nuer ethnic group, of attempting a coup d’état. Since this accusation, Kiir has razed numerous Nuer villages and massacred Nuer people. In Juba, the capital, a Nuer person’s only safe place is the United Nations peacekeeping camp; if they step foot outside, they are at risk of being slaughtered. In retaliation, Machar has condoned the slaughter of numerous Dinka people at the hands of the “White Army,” a band of Nuer warriors. As a result, there have been over 200 reported violent incidents, 1.69 million and counting reported internally displaced people (IDP), and nearly 1.6 million reported refugees; think of what and who has not been reported.

On April 11-14, a week after the Idlib chemical attacks, Kiir released poison gas on rebel (Nuer) territories: first Yuai, then Waat. Where was the American media attention? Only after directed, intensive searching, did I come across the report by the South Sudanese News Agency. Why should I have to purposefully look for this kind of news? Although American news sources do report on the South Sudanese conflict, it is intermittent. Why aren’t the South Sudanese getting the same amount of press coverage as their Syrian counterparts?

I do not devalue the seriousness of the Syrian civil war. Yet I believe that other conflicts are equally as important to address. No matter where in the world it occurs, or who is involved, conflict of this scale, of this viciousness, should be spotlighted. Last time we decided to turn a blind eye to a growing non-white ethnic conflict, between 800,000 to 1 million Tutsis were slaughtered in Rwanda, 100,000 Bosnians were massacred in Bosnia and Herzegovina. More than 8,000 people were murdered in a town called Srebrenica, and now Juba is the new Srebrenica. To craft a solution that is not only successful, but sustainable in the long term, we must arm ourselves with information on the history and culture of the region.

Reports and photos are our weapons. News and media outlets are our suppliers. Now they must supply us with these informative news developments; we are ready to fight.