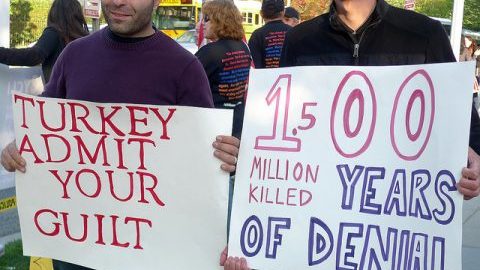 One hundred and two years ago, on April 24, 1915, hundreds of Armenian intellectuals, government officials, writers and poets were rounded up and killed by Ottoman officials, marking the beginning of what became the Armenian genocide.

By the start of the 20th century, the Ottoman Empire neared its ultimate collapse, and the Armenians living in the empire were seen as a threat. In 1908, a group called the Young Turks seized power, and brought with them a vision to “Turkify” the empire. They purged the government of any opposition and rid the empire of any perceived threat. Thus, they mobilized efforts that collectively would amount to the Armenian genocide.

One and a half million Armenians were killed during the massacres. To this day, Turkey refuses to recognize the genocide, making it a criminal offense of “insulting Turkishness.” I wrote about the Armenian genocide three years ago detailing more specifically about the events that occurred in the attempted extermination of Armenians, in order to explain why, after over 100 years, it is important to recognize the genocide. Today, I write again, not only to reiterate why recognizing the genocide is important, but also to look at the events occurring in Turkey today, and why they should sound alarms in our mind.

Last summer, on July 15, 2016, the Turkish military staged a coup against the government and attempted to overthrow Turkish President Recep Tayyip Erdogan. The coup failed and ended with a death toll of 276. The Turkish government came out with the accusation that the coup was staged by Gulenist military officers.

Gulenists are followers of Fethulla Gulen, an Islamic preacher from the 1960s. The Gulenist movement advocates for an Islamic lifestyle, with a strong value for education and maintains a pro-Western outlook. When Erdogan came to power in 2002, his party, the AKP, and the Gulenists were in alliance, but by 2014, Erdogan believed that the party was trying to form a “state within a state,” and began to rid Gulenists from government.

Despite Erdogan’s accusation that the coup was staged by Gulen followers, Gulen, who now lives in exile in Pennsylvania, denies these claims.

Critics of Gulen “…say he has built a dangerous cult that has infiltrated all corners of the Turkish state—a fifth column that has shown its true colours in this latest coup attempt,” according to an article published by BBC.

For example, in a New York Times article providing an overview of the events of the genocide, author John Kifner explains how after the Young Turks joined World War I, “…the Young Turks began a campaign to portray the Armenians as a kind of fifth column, a threat to the state.”

One hundred years ago, the Armenians were the threatening “fifth column.” What followed soon after was the killing of Armenian intellectuals. Today, Erdogan and his party perceive the Gulanists, and other opposition parties as the “fifth column.” Since the attempted coup, Erdogan has instated a state of emergency in Turkey, which has allowed the government to fire or arrest 130,000 people suspected of involvement, and arrest about 45,000.

“Six thousand people in academia have lost their jobs…Fifteen universities, 1,000 schools, 28 TV channels, 66 newspapers, 19 magazines, 36 radio stations, 26 publishing houses and five news agencies have been shut down,” according to the New York Times.

While the use of the phrase “fifth column” may be just a coincidence, a common phrase used to refer to a threat to a state, the parallels between the events leading up to the fall of the Ottoman Empire, and what is currently going on today in Turkey are undeniable.

Though the Young Turks orchestrated and implemented the measures that amounted to the Armenian genocide, Armenians had originally supported the group after they overthrew Sultan Abdul Hamid II and instituted a constitutional government. The Armenians were hopeful that under the new government, they would have equal rights in the state. This was obviously not the case.

A parallel comparison can be made with Erdogan’s rise to power. In 2002, when his party first came into control, Erdogan had the support of the majority of individuals in Turkey. With his promise to bring democracy to Turkey, Erdogan gained the support of Kurds, Armenians, Assyrians and other marginalized groups. At the start of his role as Prime Minister, Erdogan made democratic reforms and the economy grew in the first nine years of his power. However, these democratic gestures, over time, revealed to be more displays then genuine change, as the government turned more authoritarian. Turkey censored the Internet, restricted academic institutions, and as Erdogan constrained the military, he began to oust certain government officials and persecute journalists.

In the same way the Young Turks persecuted groups that challenged the “Turkification” of the Ottoman Empire, Erdogan and the AKP have persecuted any form of opposition, and silenced the media.

Since the coup, with the “purging” of government officials, journalists, doctors, lawyers and any other individual seen as a perceived threat to the government, many in Turkey have chosen to flee the country themselves before the government seeks them out. Many have fled to different European cities, or to the United States, in self-imposed exile.

“I interviewed more than a dozen exiles…in addition to many people inside Turkey—believe that families are being deliberately destroyed, as if the aim is to end lineages. As one of the purged…said to me, ‘This is a kind of genocide,’” Suzy Hansen writes in a New York Times article.

This past week, on April 16, 2017, Turkey voted, and agreed, to pass a referendum that would greatly expand Erdogan’s powers as a president. This new system eliminates the role of prime minister and transfers that power to the president, allows the president to issue decrees and appoint judges, allows the president to order disciplinary inquiries of civil servants and includes other measures expanding executive authority.

The Young Turks were freely able to implement their solution to the “Armenian problem” once they cleared the government of any obstacles that stood in their way from doing so.

I’ve had people tell me that the Armenians’ insistence on recognizing the Armenian genocide is just a chip on our collective shoulder, that we refuse to let go of. I’ve had a professor refuse to use the phrase “Armenian genocide” during a lecture that covered the fall of the Ottoman Empire, and instead posed the issue as a question of whether the term genocide can be applied or not.

So why should we recognize the Armenian genocide? Well 100 years ago or not, the events that took place leading up to the massacres of the Armenians seem peculiarly familiar to the events taking place in Turkey over the past decade and half. These events in Turkey are not isolated to this particular moment in history. A country that denies the violence of its past and presents it as a fiction, can continue to use that violence in its present.

The cliché “history repeats itself” rings unnervingly true in this case. To pretend like the past doesn’t matter is to refuse to see how it shapes the present.