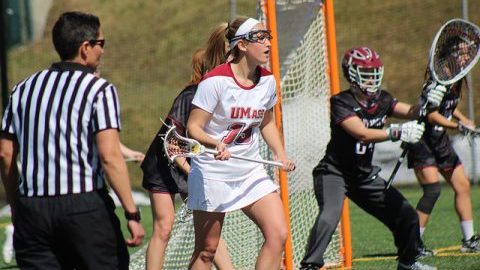 The 24 goals scored set the all-time single game record for UMass. The Minutewomen (7-3, 1-0 Atlantic 10) have now won six straight after beginning the season 1-3, and Burnett has 14 goals in her last three games.

“We stress as a team that we want at least ten goals per game to be assisted, and I think that with the exception of one, every one of my goals was assisted on,” said Burnett. “I think that was the key. My teammates were able to get me the ball and I was able to finish, they did a great job passing the ball today.”

Hannah Burnett scored the Minutewomen’s first goal 2:45 into the game, and went on to tie the UMass record with six more in the first half alone. Turner added four and Santos had two to give UMass a 13-6 advantage after 30 minutes as the Minutewomen offense scored 13 goals on 29 first-half shots.

“I think it’s just trying to be aggressive, trying to move the ball quickly,” said Head Coach Angela McMahon. “I think it’s just trusting each other, working the connections we have, and then trying to build even more connections. The more people we have involved in the offense, the harder we’re going to be to mark, scout, and defend, so that’s ultimately the goal; get as many people involved, having people come off the bench and contribute. I think it created a lot of positive energy today.”

St. Joe’s Nora McCallion scored her 23rd goal of the season 1:18 into the second-half to pull the Hawks within six. However, just ten seconds later, Hannah Murphy blew by defenders and beat goalie Amelia Deibler with her first goal of the game to make it 14-7.

“(Hannah’s) connections with her teammates and her ability to read plays and what’s in front of her have been key,” said McMahon. “She’s being aggressive, she’s timing her cuts well, but also her teammates are finding her and she’s putting the ball away. You want to get her the ball as much as you can, because she’s a fantastic finisher, and hopefully that keeps going for us.”

While the Hawks employed a run-and-gun strategy for much of Sunday’s game, the Minutewomen offense was based on patience. McMahon’s team was setting hard screens and making sharp cuts to free up shooters on nearly every offensive possession.

UMass’ 13 first-half goals was its second highest scoring output of any half this season, the largest coming in its previous game against Virginia Commonwealth (14 in the first half).

The Minutewomen will travel to North Carolina to face the Davidson College Wildcats this Friday in their third A-10 contest of the year.

Henry Brechter can be reached at [email protected] and followed on Twitter @HBrechter.