Jose Antonio Vargas speaks on immigration, race and what it means to be an American 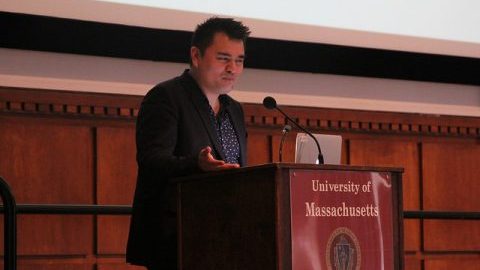 Pulitzer Prize winning journalist, filmmaker and immigration rights activist Jose Antonio Vargas challenged journalists on Tuesday “to think about words and how to use them” in terms of how they report on undocumented immigrants in the United States.

As part of the University of Massachusetts journalism department’s series, “Social Science Matters: Perspectives on Migration,” Vargas gave a lecture on his experiences as an undocumented immigrant and what it means to be an American citizen, beyond just being born in the country.

In the Student Union, Vargas kicked off his lecture by retelling the story of his decision to attend President Trump’s first joint session of Congress.

“I am not going to allow a president to scare me from my own country,” said Vargas, who moved from the Philippines to the US at the age of 12. At the age of 16, he discovered that his immigration papers were fraudulent and that he had immigrated to the US illegally.

In 2011, Vargas “outed” himself in his New York Times article, “My Life as an Undocumented Immigrant.” Vargas was surprised, though, to find that no news outlets reacted to this piece, he recalled.

So, in a bold move, he outed himself to US Immigration and Customs Enforcement. At the time, Vargas was writing a cover story for Time magazine on the experiences of undocumented immigrants. He asked ICE for comments on his undocumented immigrant status, to which they refused to give him a comment.

Vargas said, in that moment it had occurred to him, “No comment was an apt metaphor for undocumented immigrants.”

In terms of facts, Vargas elaborated on the facts of undocumented immigration in the US, for they are too often times misconstrued, according to him.

He presented data showing that undocumented immigrants commit less crimes than native-born Americans and that illegal border crossing is at the lowest it has been since the 90s.

In response to the millions of undocumented immigrants living inside of the US, Vargas said, “Our existence is not defined by our legality.”

The concept of legality, Vargas explained, is a construct of power, referencing that slavery, lynching and the Holocaust were all legalized by the immoral individuals who held power during those times.

Toward the end of the lecture, Vargas spoke about his mentors Marcia Davis, an editor at The Washington Post where Vargas first worked as an intern and then as a writer, and Peter Perl, another Washington Post editor and a personal mentor. Both encouraged Vargas to keep writing despite his undocumented status. He mentioned that the two of them are one of the reasons why he is in the position of success he is in today.

Vargas then moved on to talk about citizenship, recalling his most recent television appearance on the “O’Reilly Factor,” where Bill O’Reilly told Vargas at one point, “You and the other people here illegally don’t deserve to be here.”

In response to this comment, Vargas then described another form of citizenship, “a citizenship of participation,” where immigrants become citizens by working and participating in their country.

“Citizenship is knowing our own equalities are tied within one another,” said Vargas.

Despite his 24 years of living in the US, Vargas mentioned that he will never be able to become a documented American citizen due to the fact that he has lied about being a documented citizen in the past. However, Vargas spoke about the importance of citizenship and how individuals born in the US should not take it for granted.

“Citizenship is more than what you are. It’s what you practice being,” he said.

Alvin Buyinza can be reached at [email protected] and on twitter @abuyinza_news.