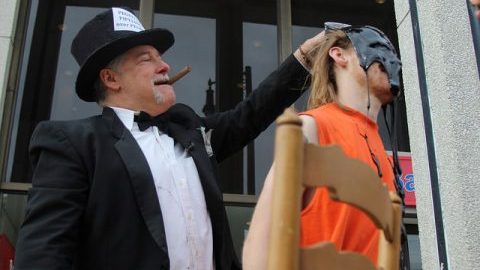 Not 10 minutes after their demonstration began broadcasting live over Facebook, Marc Osten and his posse of paint-splattered protesters had garnered an online audience of over 100 people.

The protest took place outside the South Pleasant Street Bank of America in Amherst on Thursday, as Osten and about 16 other organizers and local residents gathered for what Osten described as “guerrilla theater” to protest Bank of America’s investments in the fossil fuel industry.

“Sometimes it’s important to get out here and draw attention to the craziness, the action, the charade,” said Osten, who was dressed in a tuxedo and a top hat that had “Profits & Pipelines over People” written on it.

Osten, cigar in mouth, sat at a table playing the stereotypical role of a CEO at a big bank. Standing behind him was a man dressed in black and wearing sunglasses, who was supposed to represent the CEO of an oil company, whom Osten was “buddy-buddy” with. Osten’s customers would line up to open or close their bank accounts, and he would then try to persuade those dissuaded customers to stay.

Whether he was able to persuade them or not, the outcome for all of Osten’s customers was the same. They would leave his office and he would then pour a jar of black paint over their heads – representing oil. Afterwards, the customers would collapse on the ground, pretending to be dead.

Other organizers laid signs with phrases such as “Safe and stable long term jobs” and “Clean air and water” over their bodies. These phrases however, were crossed out.

Kevin Young, a University of Massachusetts assistant history professor, was one of the seven collapsed on the ground, drenched in paint and shivering in the 40-degree weather.

“Compared to what other people are suffering right now, this is a really small sacrifice to make,” Young said.

Young believes that either demonstrating outside of Bank of America or leaving the bank as a customer can be considered forms of protest and taking action.

“It’s a way that everyone in the country can take action on their own and collectively, totally irrespective of the electoral process,” he said.

“Taking our money out of banks is one thing we can do that kind of circumvents the politicians,” Young added.

Stephen Yoshen of Cummington, Massachusetts agreed with Young, arguing that instead of investing in fossil fuels, individuals should be investing in industries that would help the country more in the long run.

“The big banks have a big part to do with the further destruction of the planet,” Yoshen said. “We need to divest our money from the big banks and invest it into local regenerative agriculture.”

Through performative demonstrations such as this one, Yoshen hopes to grab people’s attention and reach a wider audience with his message.

“I think people pay attention to spectacle, it’s what gets people’s attention in these days,” he said.

In December, Osten participated in a protest to get TD Bank to withdraw its investments from the Dakota Access Pipeline. He and three other individuals were arrested after they chained themselves to the front and back entrances of the Amherst branch of the bank.

Osten believes that theatrical protests give organizers, who demonstrate regularly, some much needed fun.

According to a press release sent out by the protesters, the bank divestment campaign targets TD Bank, Bank of America, US Bank, Wells Fargo and others.

“They called on individuals and towns to immediately close their accounts with banks that finance the fossil-fuel industry,” stated the release. “Since November 2016, individuals and cities have divested more than $5 billion from these and other banks.”