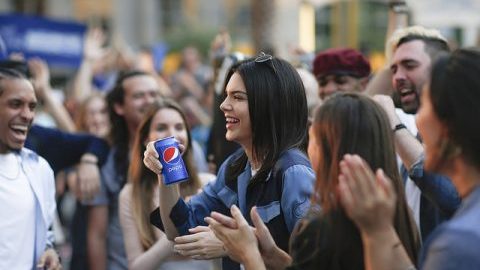 Scan your room. Tell me what you see. You might have noted a laptop, a cell phone, a pair of shoes and a half-full bag of chips tossed on top of a textbook that you’ve been meaning to read but haven’t yet.

You probably paid little to no attention to the fact that the laptop was a Mac, the cellphone a Samsung, the shoes Converse, the chips Takis and the textbook McGraw-Hill.

And why should you? In one day, we are exposed to 4,000 to 10,000 advertisements. While the exact number of advertising exposure varies from source to source, and though exposure does not necessarily mean full acknowledgment and awareness of these ads, we can agree that even on the conservative end of the spectrum, that’s a lot of ads. And with this sensory overload of information, our brains know to filter out unnecessary details, so most of these flashy signs and catchy slogans vying for our attention fade into the background, and go unnoticed by us unperturbed consumers.

To top it off, in addition to this slew of unnoticed ads, millennials have proven themselves to be a difficult generation to market to. Whether it’s because we came of age during the recession, or because we are entering the workforce with student debt, our spending habits differ greatly from the baby boomers, rendering traditional marketing tactics ineffective.

Despite our reputation as a lazy and entitled generation, we are a generation characterized by our passion for social justice and we are more socially progressive than preceding generations. Marketers are realizing this. Our values and insistence on corporate social accountability have changed the way companies advertise and market themselves.

However, do these new marketing techniques indicate a shift toward a genuine concern for social responsibility within company practices and company ethos? Does it even matter if companies actually care about these issues, so long as they raise awareness? Can we hold corporations accountable for upholding the values they say they care about?

The short answer to these questions are it depends, yes and yes, respectively.

What about American Eagle’s body positivity campaign with their Aerie apparel? Aerie features un-retouched images of women models of different shapes and sizes. American Eagle Aerie sales grew 26 percent in 2015, indicating that many support this campaign. In April 2016, American Eagle released an #AerieMan video that featured different sized men in their underwear seemingly to promote male body acceptance. However, later that week American Eagle released a statement saying that the video was a parody, and the company received strong backlash for making fun of male body positivity. If American Eagle genuinely cared about body acceptance, they would have known better than to publish such an insensitive April Fools’ Day prank.

So why is it important for companies to genuinely care about social issues, rather than just pretend? Ultimately, because it will help their marketing campaigns. Take the most recent example of a cringe-worthy and tasteless advertisement: Pepsi’s commercial featuring Kendall Jenner. PepsiCo has been making efforts toward corporate social responsibility by reducing their environmental impact and finding sustainable ways to produce more food. These efforts have no direct connection to the recently pulled commercial. However, if PepsiCo cared about social issues as a part of their company ethos, they would not have created the video.

Social issues, whether environmental or racial, are all interrelated, and a concern for one should reflect a concern for others. However, the commercial, one filled with appropriated imagery from Black Lives Matter protests, makes painfully clear that Pepsi not only does not understand the complexities of social issues, but has no interest in understanding them either. They “missed the mark” because they did not know what the mark was to begin with.

So how can we hold companies accountable? Corporate social responsibility is not a dead end effort. In response to Pepsi’s failure many have advocated boycotting the corporation. This may prove difficult because of the myriad of products that PepsiCo owns, but it has garnered national attention. Additionally, we see the impact of our dedication to social justice in how companies are choosing to advertise with certain organizations that align with their values. For example, in light of the sexual harassment reports against Fox News host Bill O’Reilly, 77 companies have pulled their advertisements from O’Reilly’s show. These are just recent examples of how our generation is changing advertising, but more can be done.

We can also do more by conducting our own research. Next time you hear about a company advocating for a social justice issue, delve a little deeper into company procedures to see if they practice what they preach. While the pressures we have exerted on companies to act socially responsible have altered some practices, the results have been incongruous at best: Some issues may get addressed, while others remain hidden deeper in company procedures.

We can’t allow companies to pacify us with their mere pretense or show of concern for social issues. So keep the companies guessing. Keep pushing them to do more, to do better. We can write and change the rules of advertising because we’ve already been doing it, but it will only work so long as we remain dissatisfied with false displays.