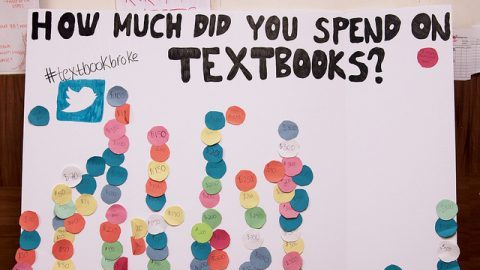 A panel hosted by the University of Massachusetts Amherst chapter of Massachusetts Public Interest Research Group (MASSPIRG) addressed the rising prices of textbooks and possible solutions to the price hikes Wednesday night in the Campus Center.

Munroe said textbook prices have increased by 88 percent in the last 10 years. MASSPIRG has launched the Open Textbook Initiative campaign to combat rising prices by encouraging professors to provide an alternative to traditional textbooks and other material for their classes.

Brigham shared his own experience of teaching without textbooks. He said he wants students to use their cell phones and other tech to research course material rather than reading it from a textbook.

“I’ve found in the last, maybe five years, that textbooks were simply too constrained and they didn’t really take on the main challenges that scholarship requires,” Brigham said.

Toggerson stressed the importance of students preparing for class and having all of the resources accessible to them. He explained that when students learn the basic information beforehand, class time can be spent in a more productive way by developing more challenging skills. This goal is more attainable when the students have the materials to do so.

Toggerson said if he wanted to he could teach his course with Newton’s “The Principia” because the material has not changed in over 400 years. He said he uses the MasteringPhysics Online Homework System, where he can post links and videos for his students.

Smith, a digital project manager at the W.E.B. Du Bois Library, discussed open educational resources. The resources are materials that are offered freely for use. These materials include syllabi, textbooks, assignments, videos and software.

Smith said, “[Students] are paying lots of money and fees for these resources that the library has,” and encouraged faculty and students to take advantage of these resources, including access to The New York Times and databases on every discipline.

The campaign has accumulatively saved UMass students over $1.6 million in textbook fees.

Lauren Machere, a communication disorders and linguistics major and MASSPIRG member said that textbook prices “are a very profound issue and it’s something that really affects students and families in general and it is easily changeable and definitely something we can work on.”

Jacob Munroe, a history and political science major and MASSPIRG member, served as moderator of the panel. He said he grew up in a low-income area and many of his friends were not able to attend college.

He said he was involved in this campaign because he had a “personal stake” in it.

He said textbook campaign’s main goal for the upcoming weeks is to talk to more professors about the initiative and spread student awareness of it.