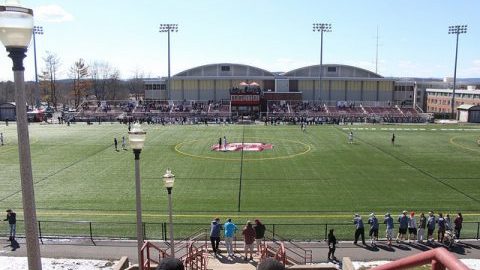 By The Man with the Yellow Hat

Anyone who is familiar with the Massachusetts men’s lacrosse team knows it refers to itself as the “Garber Gorillas” for the tough, hard-nose, never-give-up attitude and style of play.

However, the University of Massachusetts now has a much bigger problem on its hands.

With the upcoming “War for the Planet of the Apes” expected later this summer, a group of gorillas have made Garber Field a local military base, using the lacrosse field smack dab in the center of the UMass campus as its headquarters.

“We will stay here until the war is over,” said King George through translator Jane Goodall, who was hired by Chancellor Kumble Subbaswamy to communicate with primates.

“Garber Field gives us a strategic military advantage,” George said. “Located in the Pioneer Valley, no one will ever think to look for us here.”

Goodall told the Massachusetts Morning Wood that King George, formerly the cute, innocent monkey in the “Curious George” cartoons has emerged as one of the most feared military leaders in the Western Hemisphere after he felt no one took him seriously during his youth.

According to Goodall, the gorillas plan to use the towers in the Southwest Residential Area, Lederle and the W.E.B. Du Bois Library to practice scaling large infrastructures in the event of an attack on their primate brethren.

Subbaswamy advises students not to interfere with any of the gorilla activity going on throughout campus.

“Gorillas are very unpredictable animals,” Subbaswamy said. “All they asked for was Garber Field and the leftover bananas from the dining halls. It was a deal we were forced to make for the safety and well-being of our students.”

While most people on campus are terrified of the surprisingly advanced gorillas and their ability to perform human tasks, Minutemen coach Greg Cannella plans on using this as a recruiting opportunity for future seasons.

“Here at UMass, we try to preach to our athletes to play fearless, like gorillas are,” Cannella said. “Goodall and I plan to visit King George soon to talk about their lacrosse abilities. I’m hoping to open up recruiting pipelines in the rainforests of Angola, Cameroon and the Democratic Republic of the Congo. There is no NCAA rule that says we can’t dress actual gorillas, so we might as well take advantage of this while we can.”

Goodall, who has dedicated her entire life to studying chimpanzees, is skeptical of their lacrosse abilities.

“There is no doubt in my mind that gorillas have the physical capabilities to succeed at the sport of lacrosse,” Goodall said. “But in terms of using the sticks to catch, pass and shoot, well, I’m afraid it is going to take years for them to master those skills.”

Subbaswamy said Goodall will remain on campus until the gorillas leave Garber.

Both the UMass men’s and women’s lacrosse teams will look into playing its home games at McGuirk Stadium until the gorilla problem is resolved.

The Man with the Yellow Hat was once King George’s primary caretaker. He has since become a primate beat reporter covering all things chimpanzee.