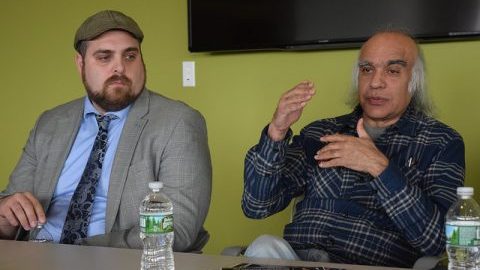 A panel of scholars and journalists met Monday in the University of Massachusetts Integrative Learning Center to discuss “Media, Policy, and the Middle East,” in an event sponsored by the Communication Graduate Student Association. UMass professor Sut Jhally, Trinity College professor Vijay Prashad, Boston College professor Matt Sienkiewicz and UMass communication Ph.D. candidate Katty Alhayek answered questions and shared their research in an effort to provide a diverse array of academic viewpoints on the complexities of the region.

The talk focused on the “present and future of media and U.S. foreign policy in the Middle East,” with the panel jumping from topic to topic in an effort to fully address their research and impressions on the area.

While themes of the talk ranged from changing representation in global media to shifts in American foreign policy, a common theme throughout the afternoon was the disconnect that has developed between real world events, news outlets and everyday consumers.

“As events work their way through newsrooms and media institutions, they go through a series of filters. What comes out at the end is a reflection of the institutional structures of the government,” Jhally said. “Americans just don’t know how to make sense of the Middle East anymore.”

Jhally and others on the panel discussed the disengagement of Americans from conflicts taking place on the other side of the world, despite the country’s close involvement. Prashad, a professor of international studies and a journalist for various global news outlets, spoke to great extent on the prevalence of hypocrisy and amnesia as commonalities in Americans’ outlook on the world.

Prashad said many of his readers in India, his home country, ask questions regarding how the American consciousness repeatedly excuses its own behavior while criticizing similar actions on the part of others. To illustrate this, Prashad noted the common belief that “every civilian killed by the United States is killed accidentally. Every civilian killed by [a Middle Eastern authority] is killed deliberately.”

Alhayek offered her own perspective on media portrayals of the Middle East as a Syrian student who has lived in the United States for the past five years. She spoke about how until 2015, “Syrian refugee representation in Western media was very old-fashioned.” Alhayek said she noticed a key shift in American attitudes toward refugees following the election of President Donald Trump.

“After the election of Trump, mainstream media gave more positive portrayals of Syrian refugees … not because they care, or because they think it’s the right thing to do, but because they hate Trump,” Alhayek said.

Connecting with the idea of media outlets changing the focus of their stories to reflect certain national or political views, Sienkiewicz, a communication professor, pointed to the comparative de-legitimization of some American news sources in respect to emerging media outlets abroad.

“We spent lots of time lobbying for the free flow of information under the presumption that it would always flow from America to elsewhere,” Sienkiewicz said. “Now, for the first time … we’re seeing it come back in the other direction.”

Sienkiewicz noted that while the United States may have served as an usher for free and unrestricted media, the growth of similar media sources internationally has increased the potential for criticism of American news outlets from abroad.

Emma Tavolieri, a junior communication major who attended the talk, said she “enjoyed the panelists and their unique perspectives,” and went on to share that the talk served as further inspiration for her to go home and do her own research on current events in the Middle East and elsewhere.

Mishka Murad, a Ph.D. student studying international education, felt the topics of the panel especially affected her as a student from Pakistan. She said “people who need to hear these perspectives the most often aren’t the people coming to these talks.”

“The talk was inspired by recent political events,” said Kylie Lanthorn, a Ph.D. student studying communication and the moderator of the panel as well as one of the event’s coordinators. On the polarizing topic of the Middle East, she said, “The goal was to bring together scholars in a safe, academic place.”

“[There weren’t only] researchers, there were scholars and journalists as well,” said Christine Olson, a Ph.D. student studying communication and one of the event’s coordinators. She went on to say she also was pleased by the diverse array of viewpoints offered by the panelists.

To close the talk, one audience member asked if there was anywhere one could expect to stay legitimately informed of world events. Laughing, Prashad responded, “Read everything and make your own judgement,” to which the remainder of the panel seemed to nod along. Prashad shared that he personally felt that no media outlet could be entirely trusted, and that reliable reporting is becoming harder and harder to find.04