‘Power Rangers’ is better than expected, but nothing more than that 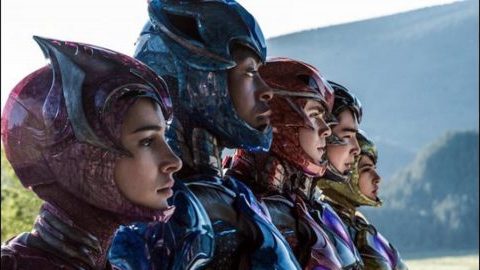 “Power Rangers” is the latest addition to a burgeoning trend of nostalgic, child-centered properties adapted for a PG-13 audience, with recent examples including “Transformers,” “Teenage Mutant Ninja Turtles” and “G.I. Joe.” For the record, I did not grow up with Power Rangers, and with mediocre trailers, I went into this film with no real expectations. Having since seen the film, I will say that “Power Rangers” surpassed my expectations, but that’s about the only compliment I can give to the film.

“Power Rangers” is about five average teens – Jason, Kimberly, Billy, Trini and Zack, who are considered outcasts in the small town of Angel Grove. One day, when they come together at a gold mine, they obtain powers after discovering five power coins. As a result, they are each chosen to be Power Rangers by Zordon (Bryan Cranston). At the same time, the evil Rita Repulsa (Elizabeth Banks) has reemerged and plans to destroy Angel Grove, and eventually, wouldn’t you know it, the world. Now it’s up to our heroes to prepare themselves and learn how to fight as a team.

The biggest surprise is that the acting and characters in the film are actually kind of impressive. Each of the actors who play the Power Rangers behave convincingly like teenagers who struggle with real-life issues, like mental illness and burgeoning sexuality. This humanization of otherwise silly subject matter helps make each of the main characters more likable and relatable. Cranston is also delightfully hammy as Zordon, even though he looks like a speaker in a Beats by Dre commercial.

Each of the five main characters have great chemistry together, with a clear camaraderie evident throughout. They even go through their own character arcs. Each character has their own personality and issues and, by the end of the film, they each discover something about themselves. My favorite scene is when the characters sit at a campfire and tell each other their deepest secrets. The feelings evoked in the scene are similar to that of “The Breakfast Club,” and that’s no easy accomplishment.

However, the positive remarks stop there. The film can be tonally inconsistent to an aggressive degree. In one scene, the movie will be dark and grim, and then silly, like the original TV show, in another. We get a scene of the funeral of a fisherman who was murdered by Repulsa, and then we get a scene that has a joke about cow genitalia.

Banks seems like she’s having a blast playing the larger-than-life Repulsa. In another movie, like “Flash Gordon,” I could see Repulsa as an effective and fun villain. But in this movie, which does a great job of showing the serious and personal drama that each of the main characters face, it feels really out of place.

Those who desire some amazing action set pieces might be a bit disappointed, since the Power Rangers costumes do not show up until the end of the film. Most of the movie is spent on developing the chemistry of the main characters. While that isn’t, conceptually, a bad idea, the film drags this process out for far too long. The film also repeatedly uses the Zack Snyder slow motion effect, which gets incredibly tedious and distracting.

Overall, while “Power Rangers” is not an atrocious film, it leaves much to be desired. It does a good job at developing its characters and has some really solid acting. Nevertheless, it suffers from tonal inconsistencies and a really meandering storyline. It’s also really unclear as to which audience this film is geared toward. It’s definitely not aimed at kids who are currently fans of “Power Rangers,” given its PG-13 rating. On the other hand, it doesn’t seem to be aimed at hardcore, adult “Power Rangers” fans since the titular heroes barely show up in costume. It’s a film that satisfies no one, but won’t particularly disappoint anyone either.

Jon Ho can be reached at [email protected] and followed on Twitter @jonathanho77.