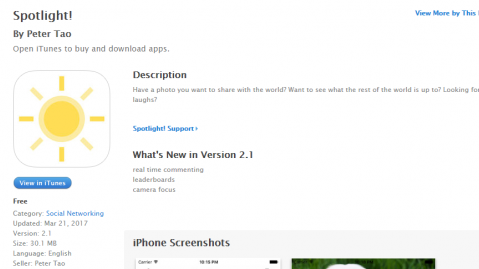 On top of his involvement with the Biological Sciences Student Association (BioSci Club) and reviving the Mobile Operating Systems Club, Peter Tao, a University of Massachusetts junior, has created multiple apps, including “Spotlight” and “Praise.” The biochemistry major and computer science minor has been creating apps for the last year and hopes to continue with his engineering.

Abigail Charpentier: When did you first have the idea to create Spotlight?

Peter Tao: Well, UMass has this super awesome hackathon every fall. Me and my roommate decided to do it this year super spontaneously and we ended up getting second place with this app we made called Bread Crumbs. It was an anonymous photo sharing app where you could just drop photos like bread crumbs at certain locations and people around you could see it… I then decided to turn that Bread Crumbs app into Spotlight, which is not location-based but a photo sharing app where people can post photos anonymously. Most of it is memes and random pictures people take. To answer your question, the beginning of this semester.

AC: How did you go about creating this app?

PT: I started making apps last year and my first one was Praise, which is an app where you can easily compliment your friends. I did that because I realized a lot of my friends were going through some hard times with illness and what not. You can connect with Facebook and it automatically gets your friends from Facebook and it is an easy way to compliment people and in real-time they are getting these compliments. But to create this app I looked at lots of online videos and did a lot of reading. There’s a lot of good forums where you can learn to make apps.

AC: How long did the process take?

PT: A long time. My first one took probably nine months, but that’s only because I had to learn how to do everything from scratch and learn every little detail of how app-making works. But Spotlight took a lot less because I already had a lot of tools and code that was already written.

PT: Snapchat and Instagram are huge now. Instagram is not anonymous. You have a profile and stuff. Snapchat is like you’re sharing directly with a friend or you can have a story. Spotlight is kind of like a combination between Instagram and Snapchat where photos get automatically deleted after a certain amount of time, which is like the Snapchat part, and it’s like Instagram because the layout is pretty similar and you can see photos, but people are also anonymous so they don’t feel this pressure to post things that other people will like, they can just post whatever comes to mind.

AC: Have you had any issues with inappropriate content since it is anonymous?

PT: That’s a good point. We have a filter that can scan for inappropriate photos and if you try to post them, it won’t let you post them. It’s connected to Google and Google has something called the “Cloud Vision API” which, if you send them a picture, they will take a look at it with their computers…and it will detect how likely it is that a photo is to be inappropriate. It shows you where the face is, emotions [in the photo] and there’s a safe search feature that will tell you how likely it is to be adult content. If it’s “very likely,” the app won’t post it.

AC: How was creating Spotlight different from creating Praise?

PT: Praise was the first one so it was a lot harder. I think Spotlight was easier because I had all of the tools that I used to make Praise so I just picked them out and put Spotlight together.

AC: What is the biggest challenge about making apps?

PT: I think the biggest one is writing code that you think is perfect and then running it to find out that it is not perfect at all and going through the code trying to find what went wrong. There were so many problems, but that’s probably the biggest one; debugging.

AC: Your apps are currently only available on iTunes. Will they eventually be available for other devices, like Androids?

PT: Yes. Those are future projects.

AC: Do you have any plans to create new apps?