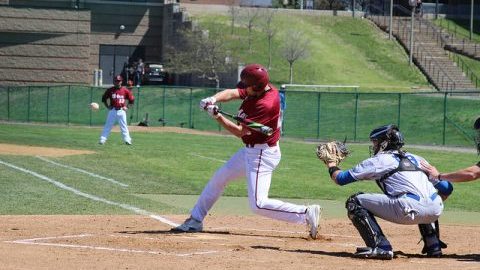 If the Massachusetts baseball team wanted to repeat its walk-off performance from Easter Sunday, it would have had to overcome a much larger deficit. The Minutemen fell to Connecticut 11-3 Tuesday afternoon in Storrs, Connecticut.

For the first six innings of the game, UMass (8-21, 3-6 Atlantic 10) was not in too bad of shape. Yes, the Minutemen were trailing 4-1 but a few good at-bats would have gotten UMass right back in it. A seven-run seventh inning made things much more complicated.

UConn (21-14, 6-3 American Athletic Conference) had been held in check by UMass starter Kevin Hassett and middle reliever Carter Knapek for six innings. Up until the seventh, the Huskies tallied only eight hits and scored only four runs. Those numbers more than doubled in the final two innings of the game.

Big innings typically consist of big hits. Hits that go for extra bases and score multiple runs. This was not that kind of inning. The Huskies managed to bat around stringing together single after single. Once Isaac Feldstein struck out in his second at-bat of the inning to end the bottom of the seventh, UConn had collected seven singles and only one double which came off of the bat of Chris Winkel with bases loaded.

The Minutemen’s failure to limit the damage and prevent big innings from happening has been well documented.

Before having to be replaced by Ryan Venditti with two outs in the seventh inning, Knapek worked out of a jam in the sixth.

A leadoff double to Winkel followed by a walk to Kenny Bergmann put Knapek in a dangerous position, with two on and no one out. The freshman left-handed pitcher worked out of the jam though without allowing a run by sending the next three batters down in order.

The Minutemen continued to struggle offensively and P.J. Poulin was a big reason why. The left-handed pitcher for UConn pitched five innings and allowed only one run on three hits. He struck out five batters, a trend for UMass yesterday afternoon.

“The lefty had good command of his breaking ball,” Minutemen coach Mike Stone said. “We struck out 12 times and it’s hard to win games when you strike out that much.”

Stone had handed the ball to Hassett to start the game. It was his second start of the year and despite a high pitch count, he maneuvered through the Huskies lineup well.

Despite recording their 21st loss of the season, UMass has a good reason to be excited heading out of a disappointing Tuesday. Tomorrow the Minutemen will take on Northeastern in the consolation game of the Beanpot Tournament at Fenway Park.

Every other year, the Boston Red Sox home field is the site of the consolation and championship game for the Beanpot tournament. First pitch for UMass and Northeastern is scheduled for 3 p.m.

“Everybody is going to be fired up,” Stone said. “Usually everybody gets fired up when we play at Fenway.”