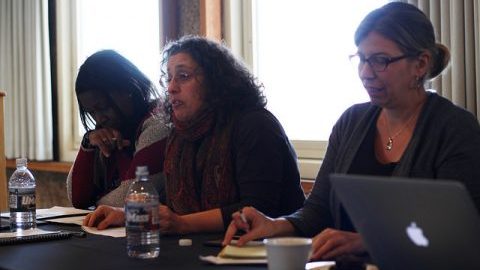 Linda Tropp, professor of social psychology at the University of Massachusetts, presented her years of research on the relationship between intergroup contact and its effect on racial tensions Monday in Thompson Hall. Community members and faculty from the psychology, sociology, public policy and economics departments attended the talk titled, “Are We Stronger Together? How Contact Between Groups Transforms Attitudes and Social Relations.”

According to Tropp, her studies show that positive intergroup contact under optimal conditions result in decreased anxiety and prejudice between differing racial groups. She defined “optimal conditions” in this context as a cooperative environment with support from institutions and authorities, and both racial groups being studied to be treated as equals.

Tropp stated that face-to-face contact is the best method of intergroup communication to result in decreased bias and prejudice. Disciplines such as in the political science and sociology field often study exposure between differing racial groups in terms of their close proximity in their living spaces, such as residing in the same neighborhood. Tropp, however, wanted to make clear that face-to-face contact is truly the best in these instances of intergroup relations.

Though Tropp’s work has mainly dealt with subjects from separate majority and minority groups, her research has also shown the same results of decreasing bias after face-to-face intergroup contact of heterosexual, cisgender subjects and members of the LGBT+ community.

Tropp found that no matter the setting for intergroup contact, it showed the same decreased prejudice for the opposing group. She said psychologists relate this to our primitive reaction to fear; when someone is different than us we may fear them, as our brain is naturally always scanning for threats. Our anxiety levels drop with intergroup contact, registering that the person we were formerly unfamiliar with as no longer being a threat, allowing us to better empathize with them and get to know them.

Audience members and Tropp alike both felt that these studies show hope for the future of race relations.

Susan Newton, associate director for research at the School of Public Policy said, “the research findings were incredibly valuable for the future of public policy. It’s a reminder of how important the implications of research are, and how we can use this information in future policy making settings.”

“Having been exposed to this area before in my research, I wasn’t entirely surprised by the findings,” Misra said. “However, seeing such clear research findings is uplifting during such a dark time of race relations and tension.”

Karina Swenson, a resident of Amherst, said her biggest takeaway point was seeing how we can use this research on a local scale as well as on a national scale to help facilitate instances of positive contact.

“The importance of establishing opportunities for positive contact in our neighborhoods to advance social relations will be key to the future of public policy, as clearly demonstrated by Professor Tropp’s findings,” Swenson said.

According to the University’s website, Tropp “received the 2012 Distinguished Academic Outreach Award from the University of Massachusetts Amherst for excellence in the application of scientific knowledge to advance the public good. Tropp has also received the Erikson Early Career Award from the International Society of Political Psychology, the McKeachie Early Career Award from the Society for the Teaching of Psychology and the Allport Intergroup Relations Prize from the Society for the Psychological Study of Social Issues.”

The talk was a part of the annual faculty colloquium sponsored by the School of Public Policy.