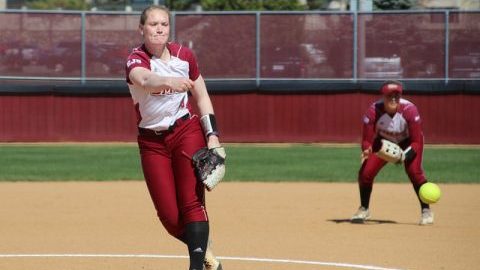 A week removed from taking two of three from then-conference leader Fordham, the Minutewomen (22-19, 10-3 A-10) traveled to Philadelphia and swept a weekend series against Saint Joseph’s on Sunday to replace the Hawks (18-22, 9-5 A-10) atop the A-10 standings.

UMass picked up a 1-0 win in game one, before taking a 3-1 victory in game two to move into first place.

“They played great softball,” UMass coach Kristi Stefanoni said. “We executed at every level, and it showed in the two wins.”

Junior Meg Colleran threw both games and was dominant throughout, picking up two wins and only allowed one earned run in 14 total innings in the circle.

Senior Jena Cozza’s single in the third inning provided the only offense of game one, as Candace Denis scored to put the Minutewomen up 1-0.

The sole run wasn’t much, but it was enough for a dialed-in Colleran. Only allowing three hits and no walks in seven innings, Colleran’s brilliance was all UMass needed to take the opener.

The Minutewomen jumped out to a quick lead in the second game, when Cozza hammered a two-run homerun to left in the top of the first inning. Cozza, who has made a major impact since her return from injury, went 3-3 with two runs batted in game two.

Sophomore Kaycee Carbone’s sacrifice fly in the sixth scored Cozza and put UMass up 3-0, which was more than enough breathing room for Colleran to work with.

Colleran, throwing for the second time in the same afternoon, was again superb, only allowing five hits and one earned run in seven innings of work.

Picking up her second win of the day and her 13th on the year, Colleran continued a recent stretch of excellence, moving to 12-1 in her last 13 starts. St. Joe’s sophomore Ashley Ventura went toe-to-toe with Colleran, throwing both games for the Hawks and only allowing four total runs in 12 innings, but she couldn’t quite outduel UMass’ ace.

“Meg has been a workhorse,” Stefanoni said. “She has been doing such an amazing job of keeping this team in games. You can never say enough great things about Megan.”

After taking both games in Philadelphia, the Minutewomen now sit in first place in the conference with just two conference weekends to go.

“I’ve been really happy with the way they’ve held their composure in tight situations, and kept competing throughout the games,” Stefanoni says of her team. “They’ve been doing a great job.”

A three-game series each with La Salle and Dayton are all that stand between UMass and its first A-10 regular season championship since 2012.

“We just need to stay focused one game at a time,” said Stefanoni. “Getting too far ahead of ourselves will put us in a bad spot, we just need to focus on La Salle and only La Salle this weekend, just winning one game at a time.”
First, the Minutewomen will play two mid-week non-conference games, hosting Connecticut on Tuesday and Boston College on Wednesday, before taking on La Salle in a three-game home series this weekend.