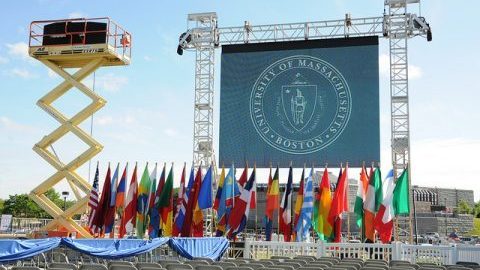 The recent budget and course cuts at the University of Massachusetts Boston have created concerns for its students and faculty members.

Construction projects around the campus, including the creation of new dorm buildings to attract more students, has lead the University into financial problems. The campus could face a deficit of up to $30 million by the end of the fiscal year in June, according to the Boston Globe.

Many students at the University are low-income, first-generation or minority students who cannot afford higher tuition increases or the barriers to enrolling in courses needed to graduate within four years, according to Marlene Kim, the president of the Faculty Staff Union and a professor of economics at UMass Boston.

As of fall 2016, 51 percent of UMass Boston’s enrolled students are of color.

“Some students can only take courses at night or certain days of the week,” said Kim. “Having fewer courses would limit the ability of students to take courses from us and complete their majors and their degrees.”

There has been anxiety surrounding the cuts because of the lack of transparency regarding what is being cut and why it is being cut, said Kim.

Ursula Barth, a freshman international relations and women’s and gender studies double-major at UMass Boston, said the lack of transparency surrounding the cuts is a concern to her and fellow students.

“There isn’t enough information about why we are getting these cuts, where they are coming from and where it is going to hit. I think that is a lot of our concern because we don’t know where they are going to cut next,” Barth said.

UMass Boston previously planned to cut 60 courses for the summer semester, according to Kim, but after 200 student and faculty members protested at last Wednesday’s board of trustees meeting, fewer than 10 summer courses plan to be cut.

According to DeWayne Lehman, the director of communications at UMass Boston, the exact number of courses being cut for the summer semester is unknown.

When cutting the courses for the summer, Kim said the departments at the University did not have a say in what courses were cut.

Lehman said these course cuts are not limited to UMass Boston.

“It’s very common for colleges and universities to look at course offerings and to eliminate, or not, particular courses or sections that are under-enrolled,” said Lehman.

For some Massachusetts students, the budget cuts raise concerns about the affordability and accessibility of college.

“We are really the only public university in Boston and take our mission very seriously: to educate people who cannot go anywhere else and to whom a college education really means entering the middle class,” said Kim.

Bonnie Pajic, a freshman environmental science major at UMass Boston, said there should be more pressure placed on the state to fund the public institution.

“Almost everyone at the school right now is focused on budget cuts as the solution and also budget cuts being the problem,” said Pajic. “Very little blame is being placed on the state for the budget crisis that we are in right now, even though I think they are the ones who should be blamed.”

Former Massachusetts Governor Deval Patrick made a deal with UMass for the state to fund 50 percent of the cost of education at the UMass universities. However, after current Governor Charlie Baker came into office, that deal was no longer sought out by neither Baker nor University of Massachusetts President Marty Meehan.

“Right now, UMass Boston is funded 22 percent by the state and 78 percent through other means. I think that is disgusting for a public university, especially one like UMass Boston,” said Pajic.

Amid pressure, UMass Boston Chancellor Keith Motley announced he will step down after 10 years as Chancellor at the University.

“We are going through hard times at the moment, but the hard times are temporary,” said Motley in an email to the UMass Boston community.

Looking to the future, Kim said she is concerned about fall course cuts at the University.

“One of the things we have not talked about is that fall classes are being cancelled right now,” Kim said. “We are concerned that the fall classes will affect the courses that are offered to our students, and if fewer are offered, and especially if these are required for majors, it will affect students’ ability to graduate in their majors.”

The University is not eliminating seats for students in any academic programs, but may combine sections of courses depending on student-enrollment, according to Lehman.

“We are preserving the students’ access to the courses they need to progress and graduate on time,” Lehman said.

Carson McGrath can be reached at [email protected] and followed on Twitter at @McgrathCarson.