The Hatch reopening brings in a large crowd 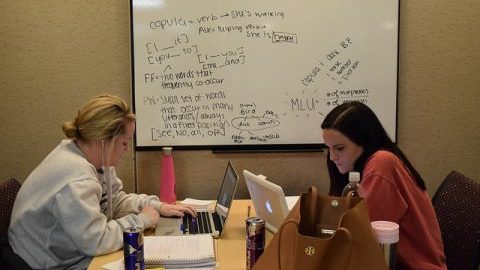 After being closed to students and staff at the University of Massachusetts since 2014, the Hatch officially reopened Monday.

The celebration of the reopening of the Hatch consisted of a ribbon cutting ceremony, as well as food and beverages provided by Sweets and More and Greeno Sub Shop.

The Hatch is now equipped with couches, tables, chairs and cubicles for students to study and grab some food.

Around 100 people, a mix of students and faculty, occupied the Hatch at the time of the opening.

“We were excited to have such a great turnout from both students and administration here supporting this really great student initiative that President Vitale has been working on for the last semester,” said Wallace, a senior political science and BDIC major. “We’ve been seeing students here since its opening and we’re really excited to see where this goes.

“We actually already have student groups trying to book the space for larger events,” Wallace added. “We’re excited to have this sort of autonomy to be able to book larger spaces for students and student groups on campus.”

Eileen Preston, a junior finance major, is excited about the space reopening and plans to do a lot of her schoolwork in the Hatch.

“I’ve used this space a couple of times and it’s very nice that there’s extra space for me to use besides the library and my dorm,” Preston said.

Executive Financial, Administrative and Planning Officer Eddie Hull is also excited for students to use the Hatch’s space for multiple purposes.

“I think it’s a great opportunity for students to reclaim some space that they weren’t able to use for a long period of time and that took the cooperation of a number of entities on campus,” Hull said.

Cameron Niemeyer, sophomore studio arts major said, “I was always kind of annoyed that it was an underused space, it was just a stack of chairs in the middle of the room … it’s really nice to have extra space to work on because especially around lunch time; you go around the Campus Center and the [Integrative Learning Center] and everything is taken so it’s nice to have this kind of underused space now available.”

“There’s going to be an opportunity for student businesses to get in here and participate in offering their goods and services to students,” Hull said. “It just helps reinvigorate the Student Union.”