The secret gem that is R. Michelson Galleries 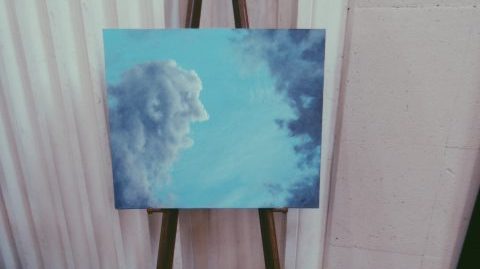 Wedged between the A.P.E Ltd. Gallery and Bueno Y Sano in downtown Northampton, R. Michelson Galleries looks imposing. Its Ionic columns rise high above the street, supporting an entablature carved with the words “Northampton National Bank.” A testament to the idea that the past never truly goes away, the building has an anachronistic appeal.

When I stepped off the street and into the cool gallery, I was greeted with gently playing classical music. There was so much for the eye to take in: an abundance of artwork and the masterpiece of architecture that was the gallery itself. Warmly lit chandeliers hang from the ceiling and the natural light from the skylights and tall windows on the second floor flood the entire space. The second floor gallery is designed as a wraparound indoor balcony with persimmon-colored curtains draping the windows–imposing but not outrageously so. I visited on a Monday afternoon and there were only three or four other visitors there. This minimal human interaction was enjoyable as I feasted my eyes on one work after another on my solo journey to distant times and places.

First up were Leonard Baskin’s drawings. Composed of thick strokes, smudges and unexpected crosshatching details, the depictions may not be the prettiest to look at but offer an underlying message: real life is not always glamorous and therefore does not have to be depicted as so. The first drawing that struck me was of Hesiod–the famous Greek poet–with half of his facial features starkly defined and the other half blurred out by bright light. Baskin’s ability to work with light and shadow was nicely captured in one of his 16 drawings that were done for The Easton Press’ 1979 collector’s edition of Aristotle’s classic text.

Baskin’s deep appreciation for literature lies in his drawings of mythological events, characters and the prominent pomegranate fruit symbol. A black and white drawing of him depicting said pomegranate could almost be construed as a pair of human lungs, granting it significance in Baskin’s mythology. No less impressive were Baskin’s sculptures that often depict the marginalized, weary and forgotten in our society and translate intangible emotions into visual forms.

Ami Fagin’s “Visual Haiku” was in stark contrast to Baskin’s black and white works. The watercolors posed an interesting contradiction; life experiences, as depicted, are ever-changing and surprising but the format of the paintings was inspired by strict haiku structure. Haikus follow a specific and minimalistic format and the watercolors were similarly restricted to a 6×6 inch size and a painting time limit of 4 hours. It is evident, however, that the multicolored stripes, whorls and angles know no bounds and are painted as a celebration of life and the infinite possibility and promise that exists within bounds.

When I encountered Vitek Kruta’s inscapes, I realized that I had never seen anything in that style before. Heavily influenced by old world style, Kruta’s inscapes were of elaborate landscapes, framed by three-dimensional columns giving the impression that you were looking out a palace entryway. The inscapes, made of wood, wood composite and sometimes gold and silver leaf, contained a certain gravitas that welcomes the viewer to take pause and appreciate the view.

For cartoon enthusiasts and families with children alike, the back of the first floor gallery is full of gems. There is an extensive Dr. Seuss collection in addition to works of artists like Grace Lin, Ed Young and David Small demonstrating the crucial intersection and interdependence of visual art and literature in children’s books. The appeal of the children’s section as an adult spoke to the universality of the themes of empathy and hope being presented.

Similarly, Leonard Nimoy’s “The Full Body Project” celebrates women in all forms and with all of their beautiful complexities. It was almost difficult to leave.

Back downstairs, I spoke to Mara Kahrmann, a gallery assistant with an infectious smile and cool nose piercing. Completely overwhelmed by the selection, I asked her how they decided which pieces to put on display. She told me they had a roster of artists, some of whom had been working with the gallery for 35 years.

“We also have thousands of works in storage,” Kahrmann said with a smile.

I thought about the paintings stacked by the bathroom stairwell and in a room blocked off by an easel on the second floor. I thought about how every piece currently on display could be taken down and replaced with one from storage. I thought about the near impossibility of imaging such a trove and chaos of art within when walking past the neat and stately building on Main Street. Then again, everything about R. Michelson Galleries was about transcending expectations. In fact, my stroll around the gallery culminated in a threefold experience: lessons on the past, paradigm shifts toward the present and a glimpse at all that is to come.

Sophia Liao can be reached at [email protected]