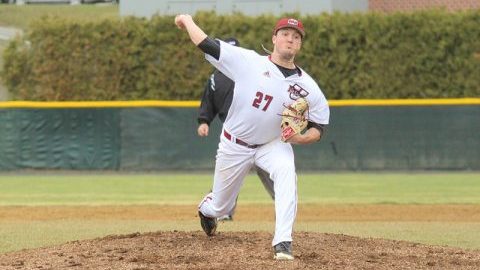 The first five innings of the Minutemen’s 8-0 loss to VCU (17-13, 6-1 Atlantic 10) Friday were a modern baseball fan’s dream. By the time Dylan Robinson grounded out to second to end the fifth inning, not even 60 minutes had passed since the first pitch and only a total of three hits were recorded.

That was until things fell apart for UMass and Lasko in the eighth inning where VCU tacked on six runs, the Minutemen (6-15, 2-2 A-10) could not have asked for more out of their starting pitcher. The sophomore right-hander has given UMass length and consistency in 2017, entering the game with a 3.34 earned run average in eight innings, only allowing two runs in his last appearance against Morehead State on March 31.

After only giving up a solo home run to Steven Carpenter and an run-scoring double to Alex Gransback, Lasko had kept the UMass offense within striking distance of the game by holding the Rams to two runs.

“Yeah, I mean it’s huge early on the game because if they explode early it kind of gets your guys down so when you get out of a big inning it gets your guys up and gets us ready to give us a chance and come back and get us a few runs here and there,” Lasko said. “But limiting the damage is a big part in what we need for success.”

However, the UMass offense was unable to produce any runs and very few scoring opportunities.

“We just didn’t get any base runners,” coach Mike Stone said. “We didn’t get anything going. We had a man on second once and didn’t drive anyone in. You don’t win games unless you have base runners and have a chance to drive people in.”

Only two batters managed to get a hit off of Thompson. A Mike Geannelis single followed by a sac bunt from Cooper Mrwoka gave the Minutemen the only runner they had in scoring position all game.

Thompson’s win improved his record to 5-2. The right-hander has an ERA of 2.54 this season and is averaging 9.23 strikeouts per nine innings. However, Thompson only recorded four strikeouts in the game and instead elected to trust his defense to make plays.

“It was one of those days, I was trying to use the defense,” Thompson said. “It was a colder day, keep the game moving. I didn’t have a really good breaking ball today so that’s kind of why the strikeouts didn’t come. But they did a good job. They put the ball in play they were on top of the plate, so they did a good job of making me put pitches where I had to.”

Arguably, the hardest hit UMass ball came off the bat of Mrwoka in the bottom of the seventh inning. On a 2-2 pitch, Mrwoka drove a ball to dead center that initially looked and sounded like it would find the trees beyond the center field wall, but instead it fell soundly into Logan Farrar’s glove.

“He was pretty crafty on the mound,” second baseman Jon Avallone said of Thompson. “He knew how to locate his pitches and get us out. We just didn’t do enough today to get the job done.”

Thompson retired the first 12 Minutemen he faced, most of which were fly outs. In the beginning of the game UMass was jumping on pitches early in the count and ultimately kept Thompson’s pitch count relatively low. Avallone believes that the Minutemen’s failure to make solid contact ultimately led to its offensive stumbles.

“I think we were just putting bad swings on the ball,” Avallone said. “Lasko pitched a hell of a game for us and we didn’t do nearly enough for him getting run support. So that’s the biggest issue.”