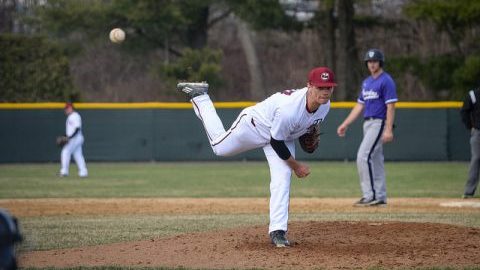 The Massachusetts baseball team got a much-needed win Tuesday afternoon, when they scored more runs against Central Connecticut State than they have the past eight games combined, by the tally of 15-0.

Not coincidentally, this game also stopped an eight-game losing streak for the Minutemen (7-17, 2-4 Atlantic 10), who had last won March 26 at George Washington.

“It was just good that everybody hit,” UMass coach Mike Stone said. “We drove people in, we hit the ball over the fence, we had good at-bats and had a good overall offensive game.”

An offense that has been stuck in the mud since April got it started early and often versus the Blue Devils. Sophomore Ryan Lever cracked two home runs in the first two innings, first with one on in the top of the first, then a three-run shot to left field in the second.

“Our guys were more focused and locked in and took better swings,” Stone said.

The 6-0 lead after two innings put the game out of reach for the Minutemen, by the end of the sixth inning, that margin expanded to 15-0.

In addition to Lever’s breakout game, Nolan Kessinger and Matt Hosman contributed three-RBI performances to add to the best offensive production of the 2017 campaign for the Minutemen.

The outburst comes on the heels of a tough opening home series against VCU. In the first games in Amherst of the season, UMass was swept and only scored a single run the whole series.

“It is a good start [to moving on from that series]. We’ll see how we play tomorrow when we play Lowell, but it’s a good start,” Stone said.

In addition to the offensive production, Kevin Hassett took the mound for his first start of the season and pitched six scoreless innings with three strikeouts and seven hits allowed.

In the most compact part of the season’s schedule, with eight games in nine days, a lengthy spot start is valuable. While he allowed the normal rotation to get some much-needed rest, Hassett limited bullpen usage as well on this afternoon.

“[Hassett] commanded the zone early and threw his breaking ball for strikes,” Stone said. “The ball was coming out of his hand real well. It’s always nice to pitch with a lead and each inning he went out there he had a good sized lead so that gives a pitcher a lot of confidence and he did a nice job today.”

Stone said the value of a long and clean start can reverberate for an extended period of time. Rest is particularly valuable when there’s a game day after day, so limited bullpen usage is a plus even in a 15-run margin.

The Minutemen hope this game knocks them out of the rut they’ve been in so far this month. Prior to Tuesday, they were 0-5 with little offensive production, with five games in the next seven days, positive momentum could start a groove the team hasn’t been able to quite find all season.

“This should give us some confidence,” Stone said. “We put ourselves in a rut the last couple of weeks and we need to pull ourselves out of that and just get going.”

Christopher Marino can be reached at [email protected]