UMass baseball looks to bounce back from weekend sweep 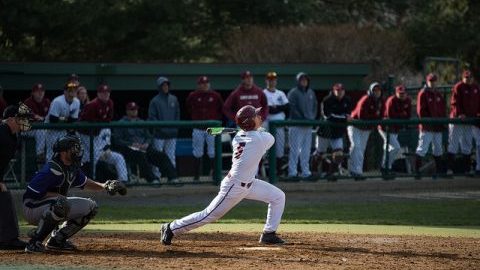 The Massachusetts baseball team looks to rebound after getting swept in its three-game series last weekend by Morehead State, including a 22-0 trouncing in the series finale. How the Minutemen (6-13, 2-1 Atlantic 10) respond will depend on their how their pitchers can combat four consecutive losses.

UMass Coach Mike Stone knows that in order for the Minutemen to get out of their skid, the team will need to have good performances from their starting pitchers.

“We need to execute our pitches on the mound,” he said. “They need to compete, play with confidence and come out strong out of the gates.”

Carter Knapek will get the ball for UMass Tuesday as it takes on Siena in the mid-week road contest. Knapek is making his first start of the season. He has an earned run average of 5.19 in four appearances thus far in 2017, and has had his share of control issues on the hill, walking seven batters in 8.2 innings.

“[Knapek] needs to execute his pitches,” Stone said. “I think for him, controlling the zone and getting ahead will be important. I would like to see him attack the zone and come out strong.”

Knapek will not have an easy assignment. Siena (9-13-1, 2-1 Metro Atlantic Athletic Conference) has five batters hitting over .290 with six slugging over .400. Senior Dan Swain is hitting .272 and leads the team with six home runs and 19 runs batted in. On the other hand, the Minutemen have seven total home runs on the season. The Saints have five batters with 10 or more RBIs while Cooper Mrowka is the lone member of the Minutemen to have more than double-digits, driving in 12 runs through 19 games.

UMass has received solid production from the top of the lineup. Mrowka, Nolan Kessinger and Ryan Lever lead the team offensively, as all are hitting .300 or better and have combined for 21 extra-base hits.

“We played extremely well Friday and Saturday and should’ve came away with a couple of wins but we fell short,” Stone said. “We have to put pressure on them offensively and execute our small ball.”

For Siena, its starting pitchers have struggled as well this season, combining for a 5.46 ERA as all its starters have ERAs above 4.50.

The Minutemen have scored double-digit runs in just two of their 19 games this season. Meanwhile, they have given up 10 or more runs in five games. Sunday’s 22-run defeat is a lingering reality that UMass still has a ways to improve on its season.

“It certainly doesn’t help [our confidence and mentality] after that loss,” Stone said. “We just need to bounce back and forget about it. That’s the only thing we can do at this point.”

However, the Minutemen have experience in responding to gut-wrenching defeats thus far in 2017. After dropping back-to-back games by a combined 25-7 score against Holy Cross and in the first of three against George Washington, UMass responded by taking the next two over the Colonials.

Stone and the Minutemen will attempt to get back on the winning track Tuesday, with first pitch slated for 3:00 at Siena Field.