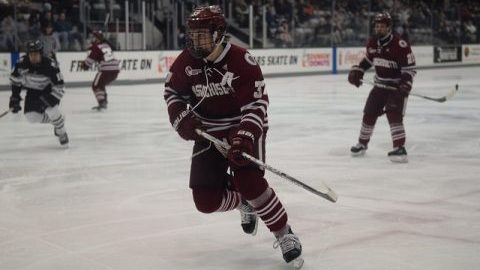 The fourth-round pick, 91st overall, in the 2014 NHL Draft by the Oilers finished his career at UMass with 15 points (four goals, 11 assists) in 63 career games. This past season, Lagesson tallied eight total points (two goals, six assists) in 36 games played for the Minutemen.

Lagesson represented his home country of Sweden multiple times in international competition as well, most recently in the 2016 World Junior Championships that were held in Helsinki, Finland.

The six-foot-three, 198-pound blue liner played one season of junior hockey, suiting up with the Dubuque Fighting Saints of the United States Hockey League, recording 16 points (2 goals, 14 assists) in 52 games, before arriving at UMass.

Lagesson was one of two Minutemen with rights to NHL squads. Sophomore defenseman Ivan Chukarov, seventh-round 182nd overall pick in the 2015 NHL Draft to the Buffalo Sabres, is the other.