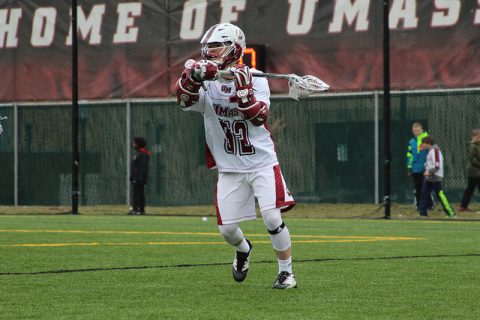 If you ask any member of the Massachusetts men’s lacrosse team about its next opponent, they will tell you that it doesn’t matter who they are playing and that no game is more important than another. That all changes when it comes to the Towson Tigers.

No current player on UMass (4-5, 1-0 Colonial Athletic Association) has defeated Towson. The team has lost five straight to the Tigers, their last victory coming in the 2012 season. One of those losses includes the 2015 CAA championship game where Towson bested the Minutemen in a tight 9-8 contest.

“You hope [they’ll be motivated], especially the seniors who haven’t beat those guys,” UMass coach Greg Cannella said. “The freshmen, it doesn’t really touch them like it does the seniors. You hope they put it in the right direction.”

Towson enters the game ranked No. 16 in the country. The Tigers have gotten it done through their defense, which allows just 8.12 goals per game. UMass has relied on its defense to keep games close this season and will need another big performance in the back end to keep things close on Saturday.

One of the players tasked with exploiting the Tigers defense will be freshman attack Jeff Trainor. Trainor is coming off a four-point game in last week’s win against Delaware, and was rewarded by being named the CAA Rookie of the Week.

“Jeff is a well-rounded player,” Cannella said. “He can do anything you can ask him to do because of his abilities. He has a good sense of the game. As an offensive player, he understands some of the nuances of the game. He understands where the opportunity may be. He’s a good all-around player.”

Cannella has a good understanding of how a typical conference game will be played. The games are typically hard fought, defensive and close, and Towson fits under each of those categories. Cannella knows that any game with Towson is a tough one to win, and that his team will have to match their opponent’s intensity.

“I would expect this to be a tough, physical team,” Cannella said. “Towson is a reflection of their coach. [Shawn Nadelen has] been a fantastic coach in bringing that type of mentality to the game. Urging his players to be tough and to play really good defense and make the tough plays on the field.”

Preparing for a team that has had your number for the past five years is never easy, and the Minutemen are focused on putting the past behind them and focusing on the now. This year’s UMass squad has played in five straight close games, and that tight game experience may serve the Minutemen well Saturday if that game ends up as the close game everyone is expecting.

“We’re just going to get in the right mindset and play our game,” sophomore attackman Tyler Bogart said. “We can’t worry about what they’re doing or what they’re thinking. It’s all about us right now.”

Game time is set for 12 p.m. on Saturday in Towson, Maryland.