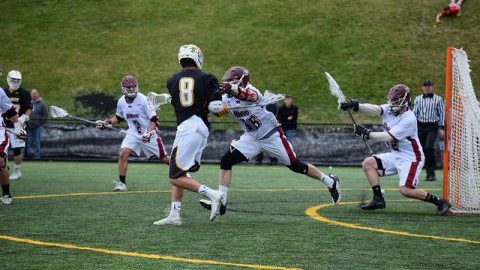 At the beginning of each season, the goal of every team is to make it to its respective conference tournament. The Massachusetts men’s lacrosse team has a shot at securing a spot in the Colonial Athletic Association conference tournament Saturday, and will have its hands full against one of the best teams in the entire country.

Beating the Pride is no easy task. They enter the game as the No. 10-ranked team, with only one loss to their name. Their victories have come from strong offensive play, as they lead the CAA with 11.55 goals per game.

Facing Hofstra’s high-powered offense, UMass goalkeeper D.J. Smith will surely be kept busy. Yet with the way Smith has been playing in cage, the Minutemen should have a lot of confidence he can get the job done.

After playing in just four games during his sophomore year and splitting time in cage last year, Smith won the full-time job this season and hasn’t looked back. The Billerica native is averaging 10.73 saves per game and boasts a .536 save percentage on the year.

What’s made Smith’s season so special has been his reliability. He has played every minute in cage for UMass with the exception of 36 minutes, 29 seconds in losses against Albany and Towson. While Smith knows he still has to earn his job each week, he finds it easier to get in rhythm by playing the entirety of games.

“I love playing the whole game, obviously,” Smith said. “It’s nice to say we might have a tough quarter or something and know you can stay in and bounce back a little bit.”

Having consistent goalkeeping play has helped turn what once was an inexperienced Minutemen defense turn into one of the team’s strongest units. As a goalie, it is on Smith to communicate with the rest of the defense, making sure they are lined up correctly.

Smith will be facing one of his toughest challenges to date with a relentless Hofstra attack. UMass coach Greg Cannella knows his team will need Smith to step up and make some saves if the Minutemen want to pull off the upset.

“[It’s a] tough chore [to defend them] because Hofsta puts out six guys that can score it and feed it,” Cannella said. “We’ll have to fly around and do our best and D.J.’s going to have to make some saves. They have some range too in their shooters. [Josh] Byrne is one of the best attackman in the country. That’s a formidable group.”

One way Hofstra gives defenses problems is its ability to feed the ball to shooters. The Pride offense is one that gets everyone involved, as they average a CAA-best 6.64 assists per game.

One of the ways Cannella has seen Smith improve over the years has been his outlook on the game. While many would have been discouraged by not being named a starter until their senior year, Smith has continued to work hard for his opportunity, and once he was given it, has ran with it and had his best season to date.

“Consistent attitude and confidence,” Cannella said when asked how Smith has improved in his four years at UMass. “He’s a guy that has worked very hard for this opportunity and appreciates the opportunity he has. He knows the window is closing in on him with this opportunity, he knows he won’t play lacrosse after this year. He appreciates it and takes advantage of every second he has.”