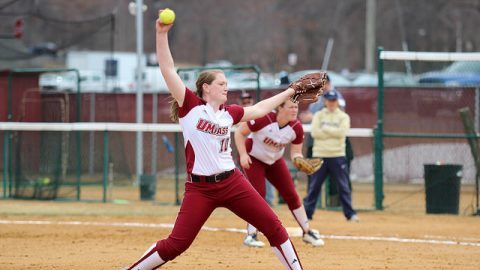 With its first Atlantic 10 weekend in the books, the Massachusetts softball team returns home this week riding its best stretch of the season.

The Minutewomen (12-15, 2-1 A-10) will host a Wednesday doubleheader against Fairleigh Dickinson, looking to continue their current hot streak.

The Knights (1-16, 0-2 Northeast Conference) have been one of the trickiest opponents for UMass coach Kristi Stefanoni and her staff to scout, as they’ve fallen victim to frequent weather cancellations.

“It’s actually been a little difficult,” Stefanoni said. “Thirteen of their last 15 games have been canceled or postponed because of weather. They were able to play [Monday] against Saint Francis, I think their record right now is 1-16, so it’s a team that we’re just going to go out and attack at all angles. I think it’s a team that, if we fall asleep and look by them, they’re a team that could probably do some damage with us. We’re going out there looking to attack, not knowing too much about them because they haven’t played in a while.”

Without too much scouting to go on, the Minutewomen are left to focus on themselves ahead of Wednesday’s matchup.

“To be honest, we haven’t really talked about it yet,” junior Meg Colleran said Tuesday, “but I think it’s a team we kind of just want to go at, try and beat them with our best stuff and we feel confident with that.”

FDU, despite its struggles, has some solid hitting at the top of its lineup, led by sophomore infielder Reanna Cervantes, who has posted a .388 batting average in 17 games, while sophomore infielder Kellie Natham has put up a .310 batting average and has 11 runs batted in this season. The Knights’ true struggles have come in the circle, where no member of their staff has an earned run average south of 5.50.

Meanwhile, UMass has won nine of its last 10 games and is carrying a ton of confidence into Wednesday’s doubleheader.

“We’re feeling very confident right now,” Stefanoni says. “If we can just stick to our main goal, our mission, not worry about what everyone else is doing, take care of our business each weekend, then I think we’ll be fine. When we start worrying about what other people are doing, and taking the focus off of us, that’s when we get ourselves into trouble.”

The Minutewomen have suddenly gone from dropping close game after close game to pulling out the tight contests, making plays when it really counts.

For now, UMass is certainly not looking past FDU, but the Knights are just another stepping stone for the Minutewomen as they chase their ultimate goal: an A-10 championship.

First pitch Wednesday is set for 2 p.m. for the first game and 4 p.m. for the second game at UMass’ Sortino Field.