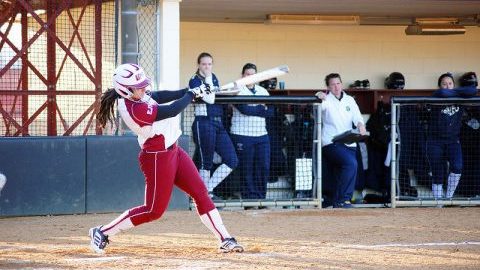 The Massachusetts softball team has found its stride as it enters the heart of the season’s Atlantic 10 conference schedule.

Coming off two wins in a three-game series against Saint Louis last weekend, UMass heads to Kingston, R.I. to take on Rhode Island for a doubleheader with the Rams (6-22, 3-6 A-10) on Wednesday.

Over the weekend, UMass took the first two games from the Billikens (15-18, 4-7 A-10), 3-1 and 4-1 respectively, but were unable to complete the sweep as the Minutewomen dropped game three by the small margin of 1-0.

After losing such a close, low-scoring game on Sunday, UMass coach Kristi Stefanoni said the Minutewomen (15-17, 4-2 A-10) simply need to keep working in practice in order to get more comfortable with live play.

“We’re definitely going to do a lot of hitting, baserunning and as much live defensive stuff as possible to get the real feel for the game and make ourselves feel comfortable and confident for [Wednesday],” Stefanoni said.

Thirty two games into its season, UMass currently sits at No. 3 in the A-10 standings, behind Fordham and Saint Joseph’s in the No. 1 and 2 spots, respectively.

After the doubleheader with URI, the Minutewomen will have the chance to battle Fordham at home over the weekend for a three game set.

Because of the tight race at the top of the A-10 right now, Wednesday’s games in Kingston could have a tremendous impact on the team in the short and long-term.

“It’s huge for us to play well tomorrow and get two wins headed into [the Fordham series],” Stefanoni said. “[Wednesday’s] doubleheader could be changing for us in a lot of ways”.

One of the biggest storylines around the team heading into Wednesday is the recent return of senior shortstop Jena Cozza.

In her first games back from injury last weekend in Saint Louis, Cozza was back in the lineup as a designated hitter.

Over the three games, she had two hits, scored a run and drove one run in. When asked about her return to the lineup, the senior had nothing but positive things to say.

“I didn’t expect to be ready this soon but I went home to see my doctor and I felt really strong,” Cozza said. “Everyone here’s been really supportive and helped me get back.”

Looking ahead, Cozza hopes to help out the team this Wednesday, “getting on base or anything like that that [she] can do to make an impact as quickly as possible.”

According to Stefanoni, Cozza adds much more to the team than just a consistent bat.

“Confidence and energy,” Stefanoni said when asked about how the senior impacts the team on and off the field. “[Players] just feel better when [Cozza’s] in the lineup.”

UMass was supposed to see URI in conference play four times last season, but due to cancellations, only two of the games were played between the Minutewomen and the Rams.

UMass took both of those matchups from URI, but Stefanoni doesn’t look at those contests as any indication of what this year’s contests will entail.

“[We’re] just as familiar with them as any other A-10 team we play,” Stefanoni said. “They have a freshman pitcher that we obviously haven’t seen yet and will be a new look for us but other than that they have a good amount of [returners].”

Stefanoni is talking about the Rams’ new righty Sarah Gunderson who has shown major promise through the start of her first season with the team. Over 17 appearances, she leads URI with a 6.22 ERA through 54 innings and is second in strikeouts with 26.

The Rams hope to bounce back when they host the Minutewomen after enduring a three-game sweep against Saint Joseph’s last weekend.

Wednesday’s game were originally set to begin at 3 and 5 p.m. But due to impending weather conditions, game one has been moved up from its original slot and is now set to begin at noon with game two starting after the conclusion of the first.