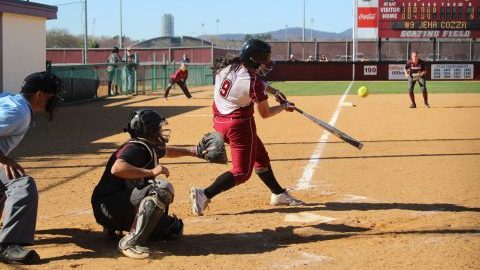 Despite a four-run lead being reduced to only one, the Massachusetts softball team topped Fordham 5-4, Friday afternoon.

In the first game of a three game series against the Rams, the Minutewomen (18-17, 7-2 A-10) entered the top of the seventh inning leading 5-1. UMass allowed the Rams (31-11, 7-3 A-10) to score three runs, one coming on a bases-loaded walk by senior Lindsay Mayer and two on a single by junior Madison Shaw.

The following batter, senior Lauren Quense, fought her way to a 3-2 count before grounding out to third base for the final out of the game.

“This was a great win,” Minutewomen coach Kristi Stefanoni said. “It’s always nice to get a win over Fordham, especially in game one of the series, but we’re just taking it one game at a time right now and not trying to get too ahead of ourselves.”

In the first inning, Fordham senior Sydney Canessa led the game off with a single and promptly stole second. Mayer followed and grounded out back to UMass starting pitcher Meg Colleran, moving Canessa up to third.

Sophomore Jessica Hughes was next and she reached on a fielders’ choice. Shaw drove Canessa in on a sacrifice fly to left field, giving the Rams an early 1-0 lead.

However, two innings later, the Minutewomen finally got on the board.

With the bases loaded Tara Klee unloaded on a Madison Aughinbaugh pitch that stayed right down the middle and sent it soaring over the left field wall. The grand slam sent the UMass bench and fans into frenzy and gave the Minutewomen a 4-1 lead.

“That felt awesome,” Klee said. “It really picked the team up and helped us get our momentum going from that point. After that we felt like we could win the game.”

UMass picked up insurance runs in the bottom of the sixth inning when Kaitlyn Stavinoha singled to right-center, scoring freshman Candace Denis and giving the Minutewomen a 5-1 lead.

Colleran improved to 10-9 in the win, going all seven innings allowing four runs  on eight hits with four strikeouts and two walks. Despite allowing three runs in the seventh inning, Stefanoni was pleased with Colleran’s performance.

“She pitched well for the most part,” Stefanoni said. “She got a little shaky at the end, but that wasn’t because she was tired, she just missed a few spots and Fordham took advantage of that.”

Stefanoni expects Colleran to pitch at some point in tomorrow’s doubleheader.

“We’ll probably start Candace in game one and Meg in game two,” Stefanoni said. “We’re not sure if Meg will come out in relief sometime in the first game, but expect to see her throwing sometime tomorrow.”

On the defensive side of the ball, Jena Cozza was making her debut at third base after getting surgery on her Anterior Cruciate Ligament in October after tearing it early in fall ball.

Stefanoni says that while she’s pleased to have Cozza back on both ends of the ball, she did not expect her to be back so soon.

“My knee feels fine,” Cozza said. “Once I got that first at-bat or that first ground ball out of the way I knew I was going to be okay.”

“Jena worked her [butt] off, that’s how she’s back this soon,” Stefanoni added. “I love her, I can’t say enough how much I love that kid. She works so hard every day and it’s great to have her back with the team on both ends of the ball.”

With the victory Friday, the Minutewomen moved into first place in the A-10 ahead of Fordham. Stefanoni would not comment on moving ahead in the standings and said they were focused solely on the next game.

UMass is back in action Saturday in a doubleheader vs. Fordham, games are set for 12 p.m. and 2 p.m.