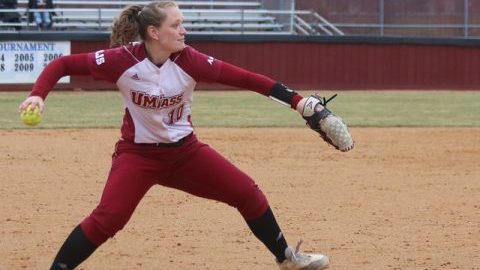 After taking two of three over the weekend against Atlantic 10 foe Saint Louis, the Massachusetts softball team (17-17, 6-2 A-10) continued its hot streak by promptly sweeping Rhode Island (6-24, 3-8 A-10) in a mid-week doubleheader Wednesday.

“It was up and down, more up though,” UMass coach Kristi Stefanoni said. “It was really good that we got two wins. We needed to shut the door offensively and defensively. We were a bit of ‘the cardiac kids’ today, but we got two wins.”

In the first inning of game two of the doubleheader, the Minutewomen took the lead and never looked back, scoring three runs in the opening frame.

“Yeah we did [get started early], Stefanoni said. “It’s definitely something we’re going to need to do against Fordham.”

In the top of the third inning, UMass loaded the bases with three consecutive walks to Cozza, Carbone and Garcia.

A Klee sac fly and Wince’s run-scoring single gave the Minutewomen a 5-0 lead they would not relinquish.

The Rams scored two runs in the fifth, one on a single by Cubello that drove in Marylynn Muldowney and another by junior Kylie Shivery that scored classmate Brianna Heller.

URI scored its third run in the bottom of the seventh when Shivery’s double to left-center scored Cubello.

Denis improved to 7-6 with the win in game two, going all seven innings, allowing three earned runs and five hits to go along with eight strikeouts and seven walks.

Minutewomen take games one in extras

After seven innings, the first half of the doubleheader was tied at five. After a scoreless eighth inning, Minutewomen sophomore Carbone led off the ninth inning off with a single up the middle and scored what turned out to be the winning run when Kate Dennis doubled to right-center in the ensuing at-bat, giving UMass a 6-5 lead.

The Minutewomen tacked on three more runs in the inning to take a comfortable lead into the bottom half. Starter Meg Colleran set down the Rams in order to give UMass the game one victory.

After URI cut the Minutewomen lead to 3-2 in the third inning, UMass added two of its own in the fourth inning courtesy of a Carbone sac fly and a throwing error.

The Rams got within one in the bottom half when Ali Summers doubled to right field, scoring seniors Muldowney and Danielle Gariglio.

URI tied the game at five in the sixth when freshman Erika Yeager drove in classmate Emily Zembik.

Colleran improved her season record to 9-9 in another complete game victory, tossing 142 pitches in the outing. She allowed five runs — all earned — on 12 hits to go along with five strikeouts and three walks.

“She was a warrior,” Stefanoni said. “Some of the hits she gave up were pretty crappy hits. [She threw] a lot of pitches… The offense helped her out a lot.”

The Minutewomen take on Fordham in a three-game weekend series starting on Friday at 3 p.m. and a doubleheader slated for Saturday at noon and 2 p.m.

Zander Manning can be reached at [email protected], and followed on Twitter @ ZMSportsReport.