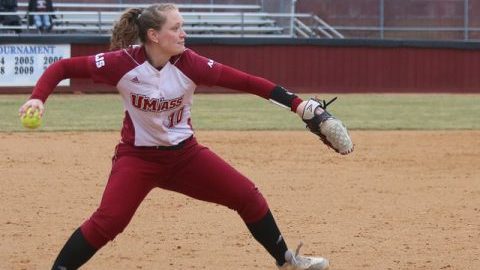 Meg Colleran threw the ball to the first base during a second game of doubleheader games against Fairleigh Dickinson University at Sortino Field on Wednesday. Jong Man Kim/Daily Collegian)

The Massachusetts softball team has been on a tear as of late, and a fairly successful weekend in Saint Louis continued that trend.

“I actually thought we did pretty well this weekend,” UMass coach Kristi Stefanoni said Sunday. “I think we struggled in the last game with just coming out with some consistent energy. We struggled with attacking strikes at the plate, and just overall our energy could’ve been a lot better. That’s what I said to them after the game was over.”

Junior Meg Colleran’s Sunday gem went to waste, as the Minutewomen couldn’t get their offense going and Billiken junior Maddie Baalman tossed a complete-game shutout to take the win in a pitchers’ duel.

Colleran went the distance, only surrendering three hits and a single run in six innings, but it wasn’t enough.

“Day one we came out guns ablazing,” said Stefanoni, “with high energy, we scored first, we did really well, so I don’t know if today because we didn’t score first we got a little down on ourselves, but we definitely could’ve come out with better energy. Overall, obviously not the result we wanted, we wanted to go 3-0, but I thought they gave it their best shot.”

The weekend marked the return of senior Jena Cozza, who had missed the first 29 games of the season with injury. Cozza went 2-6 over the weekend, driving in a run in her debut.

Colleran also got the ball to start the opening game of the series on Saturday, and her superb outing was enough. Again throwing a complete game and only surrendering one run but getting enough run support to walk away with a 3-1 win.

Kaitlyn Stavinoha continued her stellar sophomore season, going 3-4 and driving in a run and forcing an error to score another to help lead UMass to a game one triumph.

Freshman Candace Denis was in the circle for game two allowing only two runs in five innings of work, as Colleran handled the last two innings in relief for the save and a 4-2 win.

Senior Tara Klee went 2-3 in game two, driving in a run and scoring another to lead the Minutewomen offensively. Denis also helped herself out at the plate, going 2-3 and stealing her 19th base of the season.

Denis, who has been one of UMass’ most consistent threats at the plate and on the base paths, was dropped from her usual spot hitting second to hitting ninth this weekend.

“[That was] because Jena’s back,” Stefanoni explained with a laugh. “Everyone thinks that the further down you go, the worse you are, and that’s not really the case. The number nine batter is almost like your second leadoff.”

The bats went quiet in the finale, however, and what could’ve been a perfect 3-0 weekend became a missed opportunity after a 1-0 loss.

“That’s a must,” Stefanoni said. “We should definitely have won that game, or at least not been shut out by them. Megan did pitch a very good game, she did what she was supposed to do, we just had a couple bad innings, and when we decided to come back and give a little fire it wasn’t enough and it was too late.”

Despite the blip, the Minutewomen are still positioned well in the A-10, sitting tied for second in the standings. UMass has won 10 of its last 13 games, and now looks to continue its winning ways in a doubleheader against Rhode Island on Wednesday, before hosting Fordham in a three-game series this weekend.