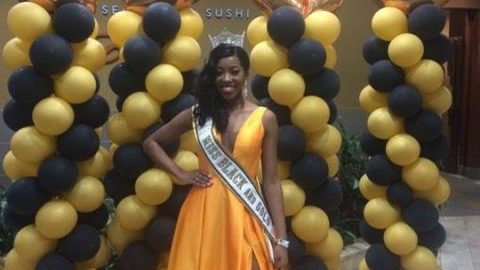 The Miss Black and Gold pageant is an annual event put together by the Alpha Phi Alpha fraternity in collaboration with Lydia Washington, associate director of student activities, to recognize women of color in the five colleges for their “academic, social, and extracurricular achievements,” according to the campus pulse page for the event.

“In 2016, at least 258 Black men, women and children were taken from this world. Black men, Black women, Black bodies, added to the list of names,” said Sabrina Victor, a junior journalism and theater major who will be moving on to the Miss Black and Gold national pageant.

The chapter level pageant was held in late February and on Friday, March 31 in Alexandria, Virginia, Victor was crowned Miss Black and Gold at the regional level, qualifying her for the national competition this summer in Baltimore, Maryland.

“[Winning] both times felt very surreal,” said Victor. She recalled waking up on April Fool’s Day, the morning after the regional competition, “I was like, ‘maybe this is a joke,’” she said.

Although the Miss Black and Gold pageant is a traditional pageant with portions like swimsuit and evening wear, chapter Vice President Washawn Castro, a sociology and psychology major, emphasized that it is a scholarship pageant, not a beauty pageant.

“We don’t focus on showing female bodies, we focus on highlighting women of color in the community who have excelled in making an impact on their campus and in life in general,” said Castro.

The pageant allows contestants to showcase their passions during private interviews with the judges about current events as well as a talent portion in front of the audience, where Victor performed her self-written piece on police violence in Black communities.

She pulled her black hoodie over her head as she said the name “Trayvon” before listing off another eight names of Black men and women shot and killed by police officers.

“It does not stop! The gunshot goes pop and life ends even though time still moves on the clock,” she said. “I felt very emotional while I was performing it. Seeing the people react to what I was saying and what I was wearing, it was eye-opening and it was beautiful,” said Victor.

Following her spoken word piece, Victor sang “Strange Fruit,” a deeply haunting song written by Abel Meeropol about the lynching of Black men and women in the south.

“That was the one moment in the pageant where I really could show what I love to do. I’m studying theater with a focus in multicultural studies so I’m very interested in using theater to bring about social transformation,” Victor said.

She notes how her tribute to the victims of police shootings was inspired, in part, by the chapter competition being held during Black History Month. She noted how the other contestants seemed to have the same idea, gearing their talents towards some aspect of Black life.

“Things like that definitely impacted us, it made us think ‘this month is important so we need to represent that throughout the pageant somehow.’ I think it was seen,” said Victor.

Castro also noticed the influence, mentioning that since it was the first time the chapter held the event during Black History Month, the fraternity wanted to make sure it was included in the event by incorporating a Harlem Renaissance theme.

The emotional impact of Black History Month continued to resonate with Victor a month later as she performed “Strange Fruit” on the regional stage in Virginia before being awarded another Miss Black and Gold title.

In the months leading up to nationals, Victor plans on working with the regional pageant director to build sponsorship and prepare for the competition.

She hopes to take home another crown on July 13, but says that the pageant has already been more of a positive influence on her life than she had ever imagined when she first attended the information session back in December.

“I didn’t know quite exactly what I wanted to do when I left [UMass]. I knew I wanted to be an actress, but I think I have more of a focus now and I’m grateful,” said Victor.

Victor hopes to use the platform she created for the pageant to work toward her goals of creating positive change through theater in her hometown of Brockton this summer.

Callie Hanson can be reached at [email protected]