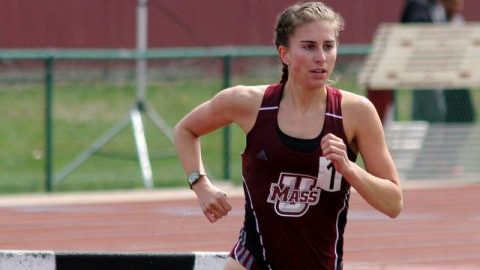 After the weather put a halt to the beginning of the Massachusetts track and field teams’ season opener, the teams opened at home on Friday at the annual UMass Invitational.

At the women’s invitational, key performances by their superstar athletes helped them score 207 points and a victory over Rhode Island (174 points), Vermont (140 points) and Boston College (135 points).

After missing all of indoor due to injury, redshirt junior Heather MacLean took first in both the 1500-meter run (4:37.12) and the 800-meter run (2:12.72), both of which qualified her for the New England Championships.

Crawford also took the win in the javelin with a throw of 139 feet, 8 inches to qualify for New Englands with junior Lucy Belt (128 feet, 4 inches), who finished third.

In the men’s meet, the Minutemen had an all-day, back-and-forth battle with Vermont, where they came out on the wrong side of the final event, the 4×400-meter relay, where UMass fell 94-92 to Vermont.

Despite the tough loss, coach Ken O’Brien was happy with his athletes’ performances.

“It was like a ninth inning baseball decision, and while we didn’t come out on top, we thought it was a successful meet,” O’Brien said. “We saw some great performances that we can build on as the season progresses.”

A huge source of the points came in the shot put, where the Minutemen swept the top four spots. Senior Brett Davies took the win with a launch of 49 feet, 7.75 inches. Also contributing to the sweep was junior Adam Bonfilio (46 feet, 7.25 inches), junior Evan Burton (45 feet, 11.25 inches) and Jonathan Collins (40 feet, 0.75 inches). Burton and Davies also combined to take first and second in the hammer throw. Burton won the event at 145 feet, 6.25 inches, while Davies threw 132 feet, 11 inches.

The throwers continued to have success against Vermont in the discus where again Davies took the win at 145 feet. Meanwhile, Burton (139 feet, 9 inches), Bonfilio (131 feet, 9 inches) and senior Kris Horn (129 feet) rounded out the top four. Sophomore John Long won the javelin at 189 feet, 3 inches and Collins placed second with a toss of 144 feet, 1 inch.

The field event athletes came up big for the Minutemen in the jumps as well, with senior Dana Pagliuca winning the triple jump at 45 feet, 6.25 inches and classmate Deion Arneaud placing second with a leap of 44 feet, 1.25 inches.

UMass also scored in pole vault with a first-place finish from junior Brendan Lloyd with a height of 14 feet, 11 inches. Freshman Mason Lord was runner up at 13 feet, 11.25 inches.

While the men were battling with Vermont just outside of McGuirk Stadium, O’Brien sent his strongest distance runners to Princeton, New Jersey for the Sam Howell Invitational where Brian Gendron qualified for the IC4A Championships with his 800-meter performance of 1:53.79. Paolo Tavares competed in the 3000-meter steeplechase running a 9:13.66, good for the IC4As as well.

While these athletes could have made a difference in the competition against Vermont, O’Brien was glad to have sent them to compete at the Sam Howell Invitational instead.

“Our athletes placed very well against very strong competition from all over the Northeast,” he said. “They weren’t at their maximum strength by any stretch of the imagination, but they had strong performances in their first outdoor competition.”