UMass track and field holds its own in Larry Ellis Invitational 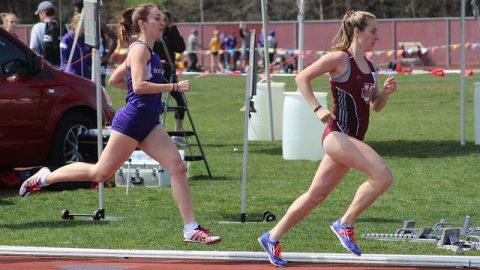 The Massachusetts track and field teams were in action this weekend at the Larry Ellis Invitational at Princeton University in Princeton, New Jersey. This meet was exclusive to athletes that met qualifying standards, as both teams faced a very strong field of competitors and many of the top UMass performers shined against top competition from all over the Northeast and Mid-Atlantic.

Redshirt junior Heather MacLean put on a huge performance in the 1500-meter run. The Peabody native ran a near five-second personal best of 4:19.19 and in the process took down a 21-year record in the event. The previous record was 4:22.13 set by Rebecca Donaghue in 1996. MacLean’s performance was good for fourth in the event and second among collegiate competitors.

MacLean was back in day two of competition to run a leg in the 4×400-meter relay, which set the second best time in program history. Elizabeth Gulino, MacLean, Diamante Spencer and Emilie Cowan ran a combined time of 3:48.12, leading to an epic-come-from behind victory over Boston College by just one second.

The 4×100-meter relay team of Cowan, Spencer, Lindsay Witt and Jada Harris took third with a time of 47.67 seconds.

Harris scored fifth as an individual in the 100-meter hurdles with a time of 14.41 seconds, a qualifier for the New England Championships.

Redshirt senior Kelsey Crawford also had two scoring throws, taking third in javelin on day one with a mark of 145 feet, 10 inches. Crawford then followed up with a fifth-place performance in shot put with a launch of 46 feet, 3.5 inches.

The Minutemen were also in action and saw a handful of IC4A qualifying performances on both days.

Minutemen coach Ken O’Brien was excited to allow his athletes to face elite-level competition on an elite-level track. The Minutemen faced the likes of Villanova and Georgetown that place a high emphasis on competing at an elite level in track and field.

Senior Paolo Tavares was the top performer on day one, taking seventh place in the 3000-meter steeplechase with a time of 9:05.62, qualifying for the IC4A Championships.

Many of Tavares’ teammates were able to join him in qualifying for the IC4A’s in several distance events.

Senior Blake Croteau ran 14:33.71 in the 5000-meter run for 20th overall and sophomore Brian Gendron qualified with a 46th place performance in the 800-meter run with a 1:53.97. The 1500-meter run also saw two Minutemen qualify for the IC4A Championships, with Cory Thomas and Zachary Frahlich finishing less than a second apart. Thomas finished in 3:55.16 for 35th place and Frahlich ran 3:55.70 for 39th place.

“We had very strong performances from our distance athletes this past weekend,” O’Brien said. “I was very happy to see a lot of athletes qualify for IC4A’s and show me that they are in a good place heading into the crucial back stretch of our season.”

UMass only sent one field event athlete in day one and he made it count, as sophomore John Long took fifth in the javelin with a throw of 190 feet, 7 inches.

Next time out for UMass will be on Saturday, April 29th for the pre-conference meet in Amherst set to start at 11 a.m.

Both coaches will be looking to put the finishing touches and tune-ups on their athlete’s performances before the very important Atlantic 10 championships just one week later.

“I’m hoping to use this meet to prepare my athletes for the competition they will be facing in the A-10s and work on some final adjustments in the next seven days,” O’Brien said. “If we can squeeze out a few points in most of the 22 events, that will be a huge advantage for us.”