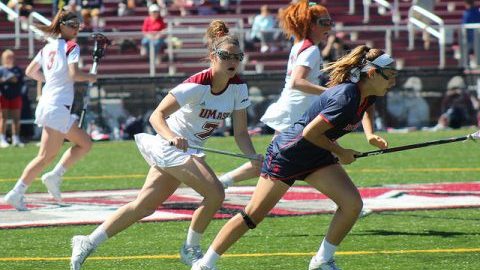 The Massachusetts women’s lacrosse team is back on the road this week, setting its sights on securing 50 consecutive wins in the Atlantic 10.

“It’s not even a thought,” UMass coach Angela McMahon said in response to how the team was handling the possibility of securing the achievement. “One game at a time. It’s just about right now.”

McMahon plans on steering her team toward focusing on having valuable practices Tuesday and Wednesday before the Minutewomen’s next game against La Salle Thursday afternoon. She claims that both coaches and players are focusing on the little things and looking at the accomplishment as a tribute to their alumni.

“We’re at a point now where each and every game gets harder to win, but in the beginning [the alumni] had to start it — they started it all,” McMahon said. “They started the tradition of what our program is now and [we’re] just so grateful to those people who put in all that hard work and really built us up to being the team that we are now.”

UMass (9-3, 4-0 A-10) is heading into this week coming off a 19-13 win against longtime rival Richmond. A career-high six goal performance from senior Callie Santos paired with a strong presence in draw controls anchored the Minutewomen’s eighth straight win this season.

The win solidified UMass’ spot at the top of the conference standings, as it was previously shared with the Spiders.

“Everyone’s just pretty fired up,” senior Hannah Murphy said of the attitude surrounding the team. “We just beat Richmond, that’s a huge rivalry. Going into that game we just really wanted to come out with the W.”

La Salle (6-6, 2-2 A-10) is currently riding a two-game winning streak, having recently broken a three-game skid that included an 18-8 loss to Richmond April 2. The Explorers will welcome UMass to Philadelphia, hosting their fourth consecutive home game at McCarthy Stadium.

In its last contest, La Salle and George Washington traded goals back and forth for most of the game. After entering halftime trailing by one goal, the Explorers eventually rallied back for a 13-11 win.

“I think there’s some pressure there, keeping that streak, but I think that it’s been everyone working every day to protect that streak and it’s exciting,” Murphy said. “We’re using that pressure as motivation.”

Murphy recalled how most coaches have told her that in the game of lacrosse, “if you win the draw you normally win the game.” She commended her teammates in the draw control circle on doing a great job boxing out and allowing her to retrieve those draws.

“My goal as a coach is to have our current players uphold those traditions, hard work and foundation that, almost seven years ago now, our alumni laid forth for them,” McMahon said. “It’s awesome, I think it’s great. We just want to keep our focus on getting better.”

UMass and the Explorers will face off at 3 p.m. Thursday afternoon.